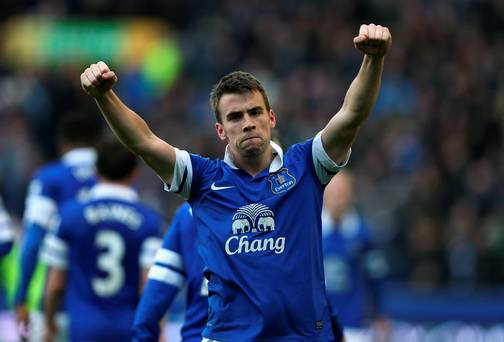 Everton right-back Seamus Coleman has made an incredible donation towards the full recovery of injured Liverpool fan Sean Cox.

The 53-year-old Irishman suffered life-threatening brain injuries back in April when he was attacked by a group of Roma fans outside Anfield ahead of the first-leg of both side’s Champions League semifinals clash.

Friends and family set up a GoFundMe page for Cox who has since been recuperating after coming out of induced coma, and Coleman donated €5,000 (£4,438) to the cause.

€2million (£1.7m) remains the target, and with donations coming in, it won’t be long before it is reached and exceeded.

The heartwarming gesture of the Republic of Ireland international surely would have melted the hearts of many Liverpool fans, and a lot of them will forever love him despite the fierce rivalry between their club and Everton.

Coleman has exhibited similar charitable gestures in the past, and it goes a long way to prove what a good man he is.

Two years ago, he donated £5,000 to bring then six-year-old Daire Flannagan, who was diagnosed with Apert Syndrome at birth, to Goodison Park, while he also contributed £8,000 to help a group of charitable Everton fans, who cycled to Goodison for the club’s homeless project, after they had struggled to meet their £60,000 target.