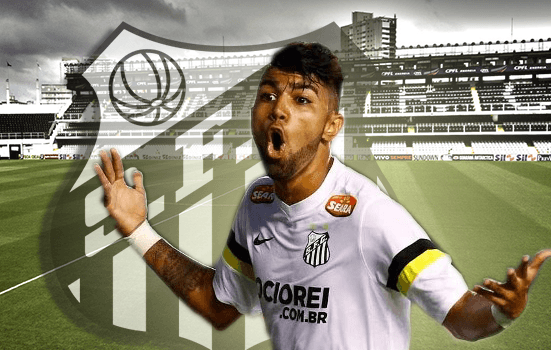 The next Zidane, the next Ronaldo – we have heard it all. A comparison with the greatest in the game in order to increase the hype and value of the player is nothing new in modern football. Sometimes generated by clubs, looking to cash in on their prized asset – sometimes through agents, trying to do the best for their client – comparison is a part and parcel of football.

Dubbed as the next Neymar, Gabriel Barbosa is another star in the making. The Brazilian forward from Santos is one of the most highly regarded talents in Brazil and has already been tipped to follow in the footsteps of superstar, Neymar.

Despite the comparisons with Neymar, it is no surprise that both players are hardly alike. Perhaps the comparison is in terms of their natural ability and a remarkably bright future, in which case it makes sense.

With the rumours of Barcelona having a first refusal on the player and the Brazilian national team lacking a true striker, Gabigol (as he is affectionately called due to his goalscoring ability) has been the talk of the town.

While some have already penned him down as Luis Suarez’s successor at Barcelona, others have been calling for him to play for the Brazil national team in place of Damiao and Fred.

Often deployed as a wide forward, Gabigol is at his best playing as the main striker. Despite his not-so-tall frame and athletic build, the Santos forward is more than capable of squaring up to the more experienced and powerful defenders in the league.

Loved by the fans for his drive, determination and work rate, Gabigol offers a lot more than just goals. The 19 year old forward is also blessed with tremendous technical skills and flair. Capable of going past his man or dropping down to support the team, Gabigol has the tools to be a complete forward in future.

Often likened to Neymar because of his flair, Gabigol has more similarities to Neymar’s teammate, Luis Suarez. Just like the Uruguayan, Gabigol has a high work rate, is skillful, two footed and can finish.

It is important to remember that Gabigol is still only 19 and is far from the finished product. The Santos forward has a long way to go and polish some, if not all of his skills, before he can fully demonstrate his outrageous talent.

Just like most 19 year olds, Gabigol suffers from the lack of consistency, inexperience and physicality. In terms of attributes, the player’s main weakness is his heading ability, mainly because of his height and build. Should he decide to move to Europe in future and play as a striker, Gabigol will need to bulk up and work on his aerial ability.

In terms of strength, Gabigol’s prime weapon is his predatory instincts in front of goal. His ability to beat a man and well timed runs in behind the opposition are huge assets for his side.

As seen in most of his goals, the Santos striker tends to play on the shoulder of the last man and beat him with pace and agility before finding the net.

Another impressive attribute of the young Brazilian is his typical South American mentality. The talented attacker has shown tremendous maturity to handle the expectations at Santos and deliver under huge pressure.

Almost always expected to pull a rabbit out of the hat, just like Neymar did, Gabigol does not disappoint. His character and mental toughness will stand him in good stead, especially in future, when he moves to a top European side.

But in terms of sheer talent and future potential, Gabigol is special in his own way – Special enough to stun Europe and be the catalyst for another Brazilian resurrection along with Neymar.

Watch Gabriel Barbosa in action below