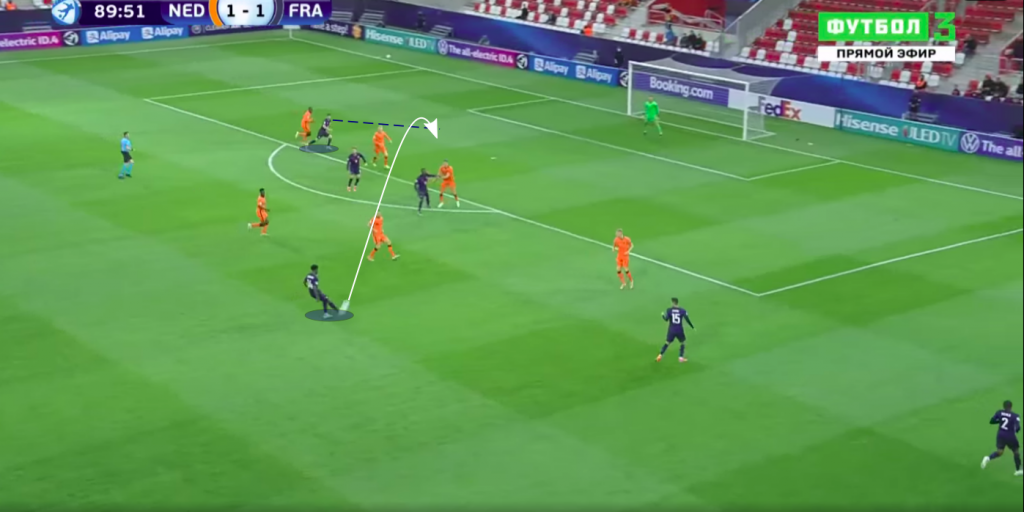 The football world is in no mood to relent right now because just two days after the Champions League final, the Under-21 European Championship‘s knockout rounds kicked off.

All four quarter-finals were played on Monday night, with Spain, Netherlands, Portugal and Germany progressing by beating Croatia, France, Italy and Denmark respectively.

Our focus will be on the second match – particularly on the performance of Aurélien Tchouaméni.

France may have been defeated by a stoppage-time winner from Myron Boadu, but they certainly looked to be the better side for most of the match.

Tchouaméni was especially exceptional, as the 21-year-old AS Monaco player bossed the midfield throughout the match.

We take a quick look at some of the highlights of his performance, his season overall and see why his qualities should be popping up on the radar of some top European clubs.

Performance vs Netherlands U21

France were fielding a 4-4-2 in their Under-21 Euro quarter-final, where Tchouaméni was positioned on the left of central midfield.

As ever, the Rouen-born midfielder helped out quite a bit in defence, winning four ground duels and making three tackles and interceptions. 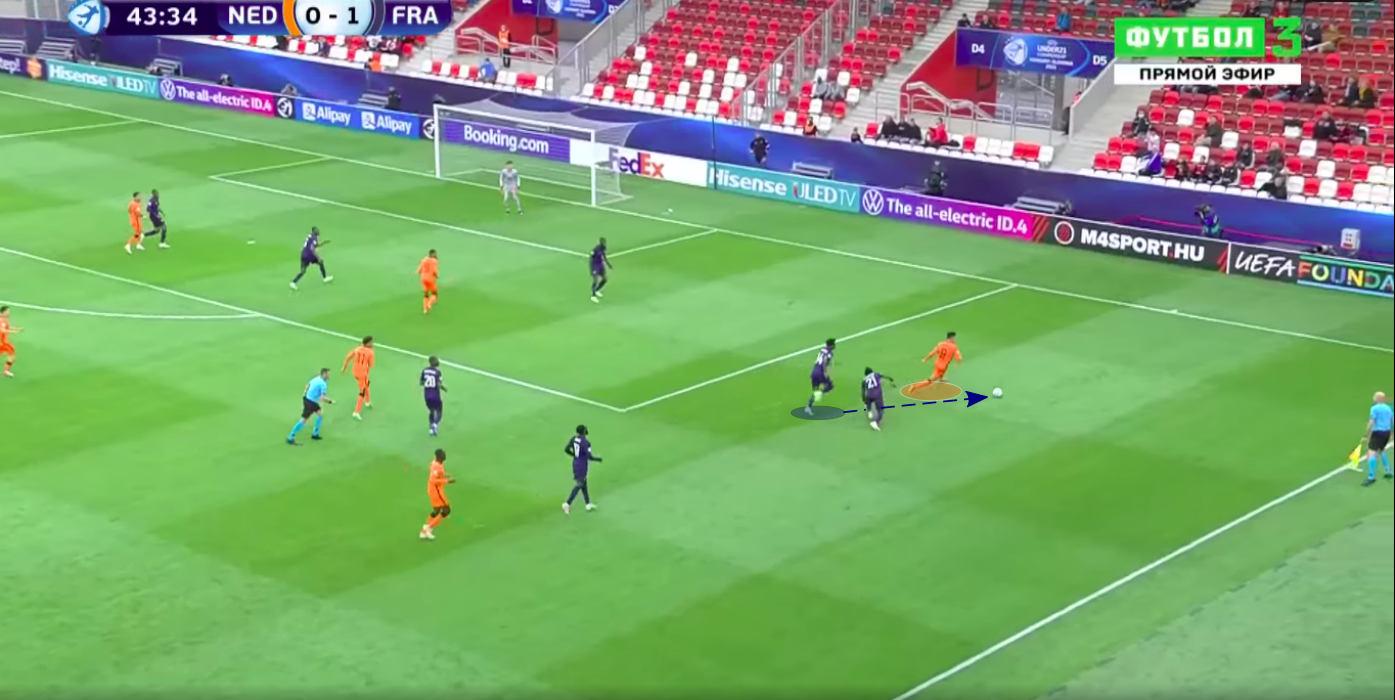 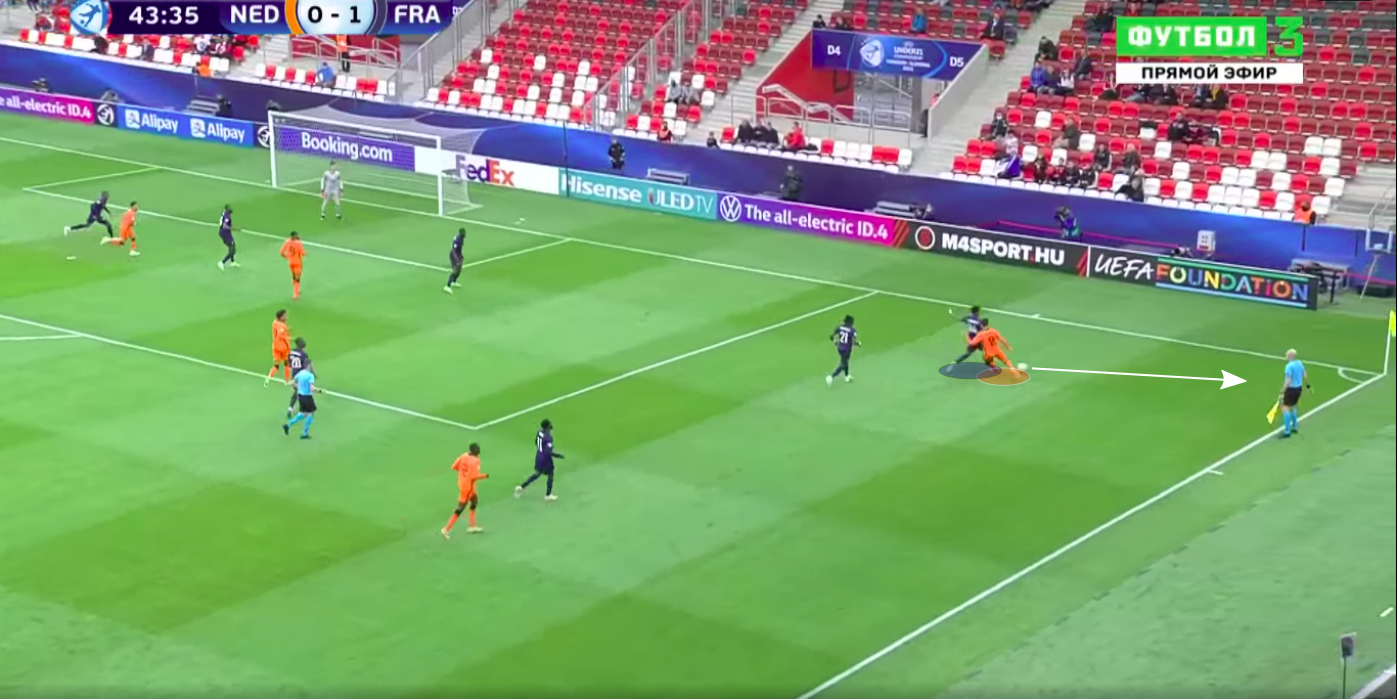 He was typically solid in the air, too, winning all of the aerial duels he contested. 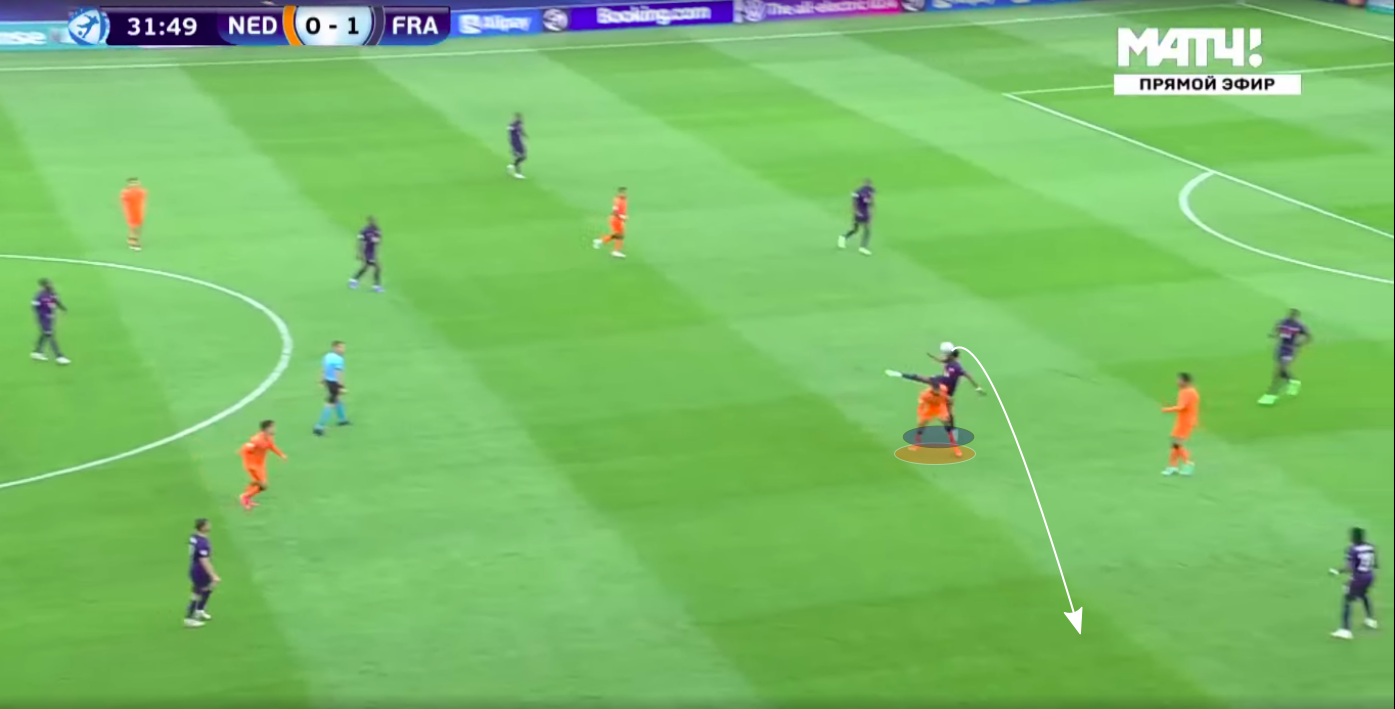 Tchouaméni had a brilliant game with the ball, displaying his calmness in possession and ability to ease his way out of pressure situations. 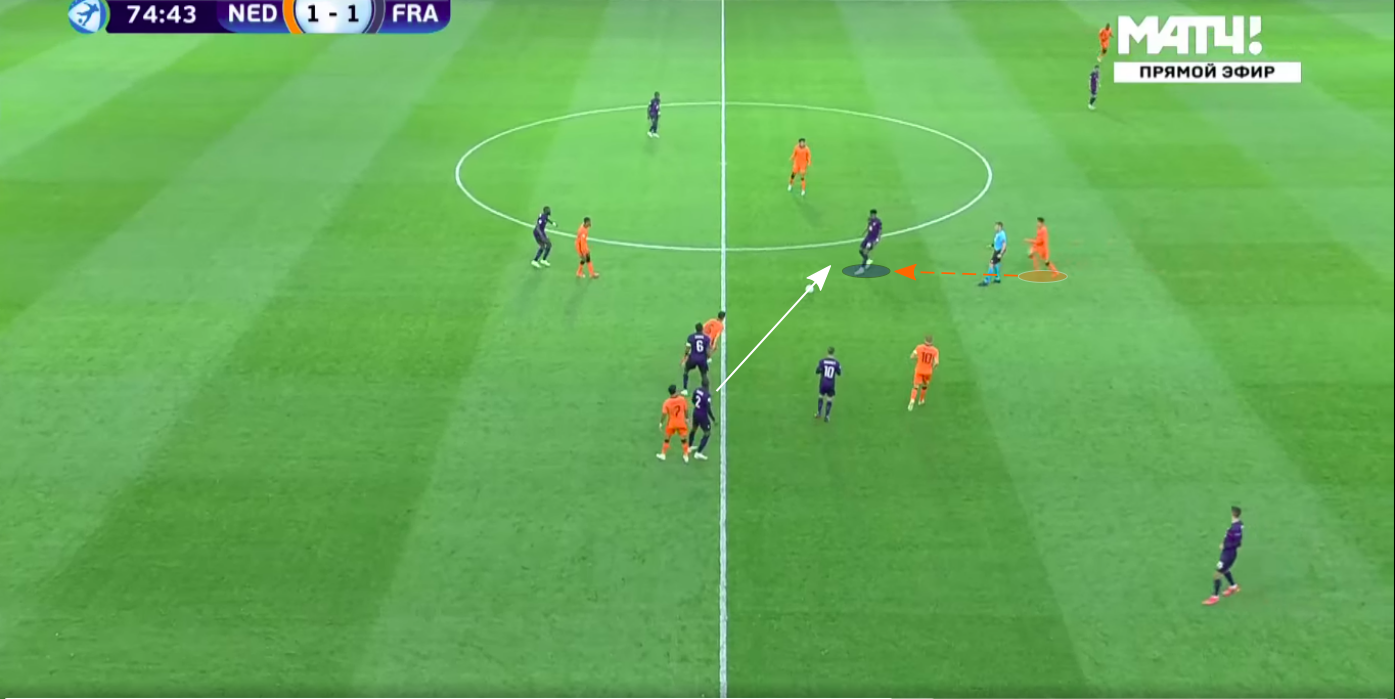 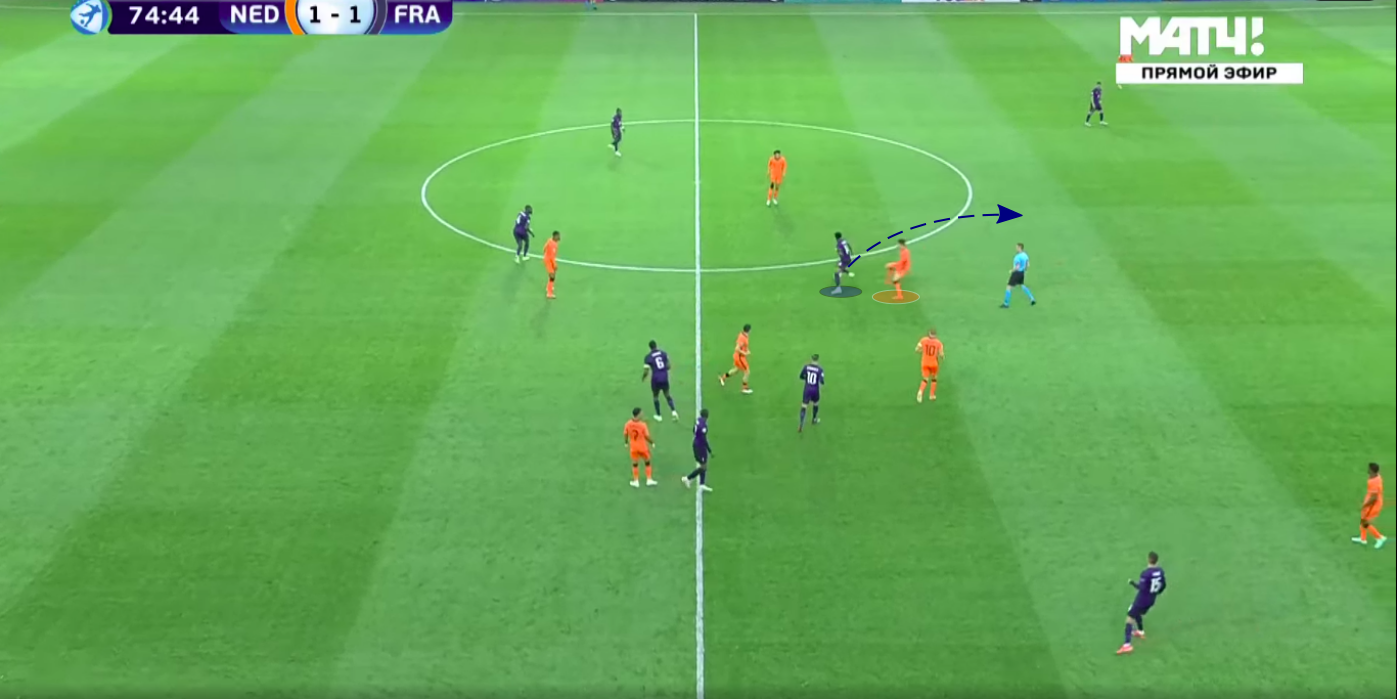 The ex-Bordeaux man does not shy away from shooting when he sees an opening either, as was proven by the two long shots he took, one of which worked Justin Bijlow in the Dutch goal.

He can also be fairly creative, with this chance he created for Houssem Aouar in the last minute perfectly proving that.

Tchouaméni’s possession-based numbers from the match make for good reading – 71 touches, 52 passes attempted at an accuracy of 91% and a couple of dribble attempts.

Tchouaméni signed for Monaco halfway through the 2019/20 season after spending about 18 months with Bordeaux’s senior team, having joined their academy in 2011.

He only managed 65 league minutes in the rest of the season with Les Monégasques but has become a key player under Niko Kovač in 2020/21 with 36 starts in a 38-match season.

The 21-year-old midfielder has repaid his manager’s faith with some serious interest, as his stats from the season show that he has been one of the best in his position in the league. 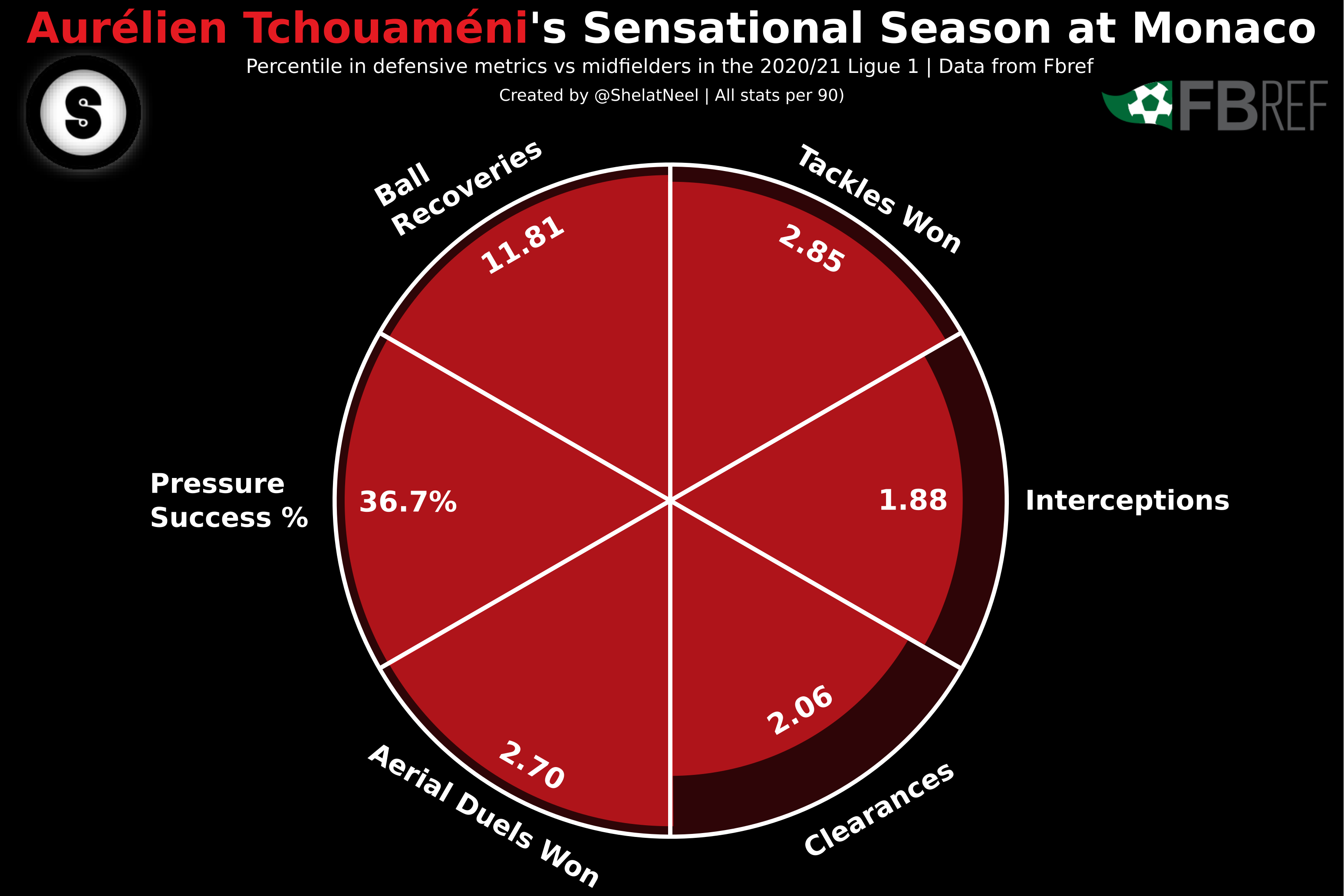 Also working in a two-man midfield at Monaco, Tchouaméni has excelled in each of the defensive metrics relative to other Ligue 1 midfielders.

On first viewing, that might seem a little low for a defensive midfielder, but the explanation behind that is that the French under-21 international attempts many risky passes with 9.96 passes under pressure and 0.26 through balls per 90, both of which rank him in the 87th percentile.

Monaco have done a respectable job in Ligue 1 by finishing in the final podium spot and getting a shot at Champions League football for next season, and Tchouaméni has certainly been key to that.

Monaco have a strong squad and, as aforementioned, they will be playing in Europe’s premier club competition next season, so the principality is certainly not a bad place for a talented young  French footballer.

However, the quality that Tchouaméni has consistently shown throughout the course of this season indicates that he could certainly do a job at one of Europe’s top clubs, and unsurprisingly, a few are looking at him already.

Chelsea are reportedly monitoring his situation, with €40 million said to be necessary to lure him away from the Stade Louis II.

He would be a perfect fit in their system, which involves two less attack-minded midfielders in a 3-4-2-1, and with their two first-choices N’Golo Kanté and Jorginho nearing the latter stages of their careers, a 21-year-old with such world-class talent would be a brilliant signing.

Real Madrid were also looking at the Frenchman last season when he was starved of match action at Monaco, but there haven’t been too many reports since.

It is no secret that their midfield is ageing, so new manager Carlo Ancelotti might want to bring in a youngster, and there are few better options than Tchouaméni, not to mention he will be cheaper than Eduardo Camavinga (who may be moving to Paris Saint-Germain instead).

Manchester United should have a busy summer on their hands, and although they seem to be looking for a right-winger before anyone else, their midfield positions severely need reinforcement.

They haven’t been linked to many defensive midfielders and certainly none from France, but Tchouaméni would surely be a superb signing for them.

If a transfer does not materialise, Kovač, a publicly vocal admirer of Tchouaméni, will certainly be a happy man.

Lille’s squad is set to be dismantled despite their title win due to their financial model, which means that Monaco will probably be Paris Saint-Germain’s biggest title challengers next season.

They will need all of their stars to shine if they are to have a good shot at their first French title since 2017, and Tchouaméni already is one of them.

Read: How Thomas Tuchel came in and revitalised Chelsea’s season.