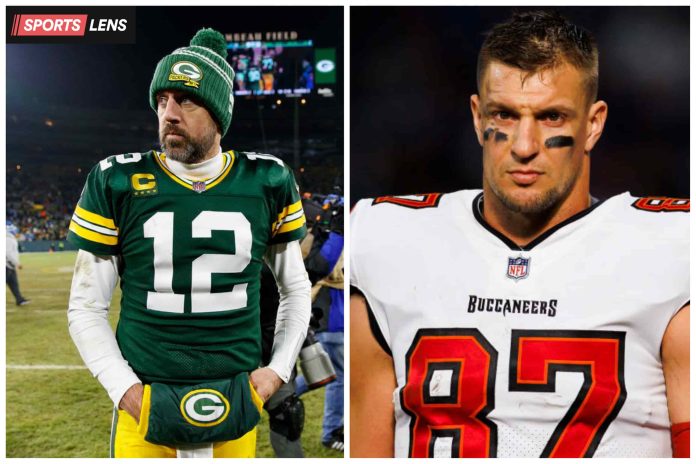 Former Patriots and Buccaneers tight end Rob Gronkowski has taken a swipe at Aaron Rodgers after the Packers quarterback claimed he can still become the NFL‘s MVP for a fifth time.

Rob Gronkowski is certainly not one for being outspoken, but his response to Aaron Rodgers’ comments made on the Pat McAfee Show showed little reservation.

Rodgers, who cut a frustrated figure as the Green Bay Packers slumped to a first losing season since 2018, while also missing out on the postseason for the first time in four seasons, was questioned whether he still has the capacity to keep playing as he approaches 40.

In response, he said: “Do I think I can still play? Of course. Can I play at a high level? Yeah, the highest. I think I can win MVP again in the right situation.

“Is that Green Bay or is that somewhere else? I’m not sure, but I don’t think you should shut down any opportunity.”

The legendary QB was the recipient of the latest MVP award, which was his fourth in total, but across his nearly-20 year career Rodgers has only ever claimed one Super Bowl back in 2011.

This, according to four-time Super Bowl winner Gronkowski, should be his first priority over individual awards as his career draws to a close.

Gronk was asked about Rodgers’ comments in an interview on ‘Up and Adams’, to which he said: “I’m totally fine with everything he said, except one major part, and that’s the ‘MVP again’ part.

“It’s just that ‘I think I can win another Super Bowl,’ and then, that would have been totally fine. Why are you thinking MVP? Like, don’t you want Super Bowls? Super Bowls are, I think, five times greater than an MVP award.”

Rob Gronkowski with a shot at Aaron Rodgers

“Why are you thinking MVP? It should be Super Bowls.”pic.twitter.com/Brpu4MFNU8

The now-retired five-time Pro Bowler went on to claim people will remember players who have won multiple Super Bowls, rather than a flurry of individual awards.

“We all know that you’ve won the MVP a few times now, but everyone would know even more how many more Super Bowls you’ve won than MVPs.

“That’s why I’m just a little confused about that quote that he just had. It should be Super Bowls. You should never be thinking the MVP when Super Bowls are twice [as good].”

It remains unclear whether Rodgers will feature for the Green Bay Packers again, but should he opt for a career change for the first time in the NFL, the 49ers and the Titans currently lead the way according to the bookmakers’ estimations.