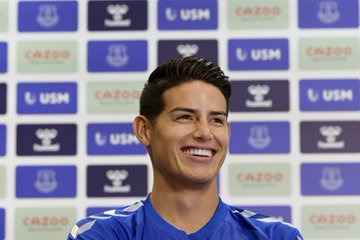 Everton secured a 5-2 victory over West Bromwich Albion yesterday, and summer arrival James Rodriguez called the shots in the middle of the park.

The Colombian opened his Premier League account and also assisted a goal, and the Toffees are definitely delighted to have such a quality player in their ranks.

While there were claims that Everton parted with around £18.3 million for the services of the 29-year-old, new reports have further confirmed that there was no fee involved in his transfer from Real Madrid to Goodison Park.

Bein Sports presenter Richard Keys isn’t happy that clubs often fail to disclose how much they spend on players, reacting thus on Twitter after new details of Everton’s deal for Rodriguez emerge:

Great piece by @SamWallaceTel Here’s the evidence that there was no fee for James Rodriquez. But why do clubs lie to us about fees – ‘not disclosed’ is popular. Why? As fans we should know what money is going where & to who. It’s nonsense. https://t.co/iCdp0OqZCv

Everton paying nothing for the 2014 World Cup Golden Boot winner is absolutely a huge steal, and director of football Marcel Brands deserves all the accolades for securing such a deal.

While Rodriguez struggled in his last season at Madrid, the former AS Monaco star is experiencing a new lease of life in the English top-flight under Toffees boss Carlo Ancelotti, and he could play a huge role as the Merseysiders look to break into the top-six this term.