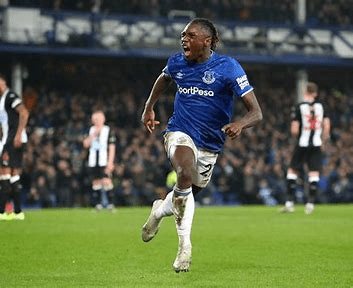 According to Telefoot la chaine journalist Simone Rovera, Everton striker Moise Kean is set to join Paris Saint-Germain on loan for the season ahead of Monday’s transfer deadline.

The move could be completed in the coming hours with only some small details left to be sorted out.

The 20-year-old has struggled to impress since joining Everton from Juventus last summer, and he is keen to leave for elsewhere on a temporary basis in order to get much-needed playing chances ahead of next summer’s European Championships.

Kean has played just 13 minutes of Premier League football this term, and the Italy international is clearly not a major part of manager Carlo Ancelotti’s plans.

23 of his 29 league appearances for Everton last term came off the bench, and he ended his debut campaign at Goodison Park with just two goals.

Dominic Calvert-Lewin remains the Toffees’ first-choice striker, while Richarlison can also play in the position if need be.

Kean signed a five-year deal with Everton upon arriving from the Serie A giants for an initial £25.1 million, and the club aren’t looking to part ways with him on a permanent basis just yet.

He scored six goals in 13 Serie A appearances in 2018-19, and will now look to get his career back on track at the Parc des Princes.