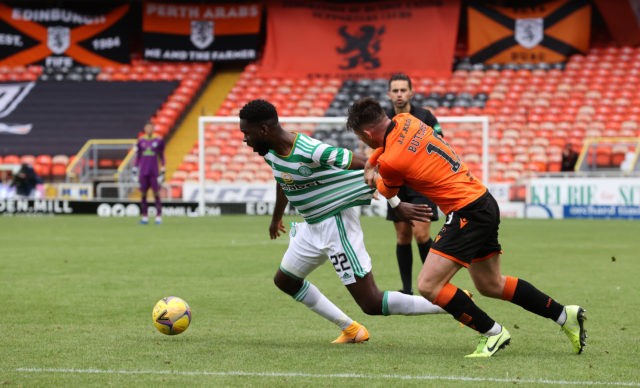 Celtic boss Neil Lennon has made it clear that he doesn’t want to sell any of his star players this summer.

However, Odsonne Edouard’s future has come under speculation once again following Celtic’s 2-1 defeat to Ferencvaros on Wednesday in the Champions League qualifier.

Edouard’s representatives are due to hold talks over his future with Celtic.

According to reports from the Daily Mail, the Bhoys are ready to offer a new contract to the 22-year-old striker to convince him to stay for one more season as they look to win their 10th SPL title in a row.

However, a host of Premier League clubs are vying for his signature.

The report claims that Everton, Leicester, and Aston Villa have made an approach to sign the French striker already.

Crystal Palace and Newcastle United are also interested in signing him, but they are likely to be priced out.

The Scottish champions want at least £40million for Edouard as they owe a 40 percent sell-on fee to his former club Paris Saint-Germain.

The Toffees are heavily interested in signing him, having regularly scouted him before lockdown.

Carlo Ancelotti has options in Dominic Calvert-Lewin, Richarlison, and Moise Kean, but the Italian still wants to add Edouard to his ranks who scored 28 goals last season in all competitions.

Villa are also in the race to sign him, but Dean Smith has other targets as well. According to reports from Express and Star, Villa are in talks to sign Ollie Watkins from Brentford this summer.