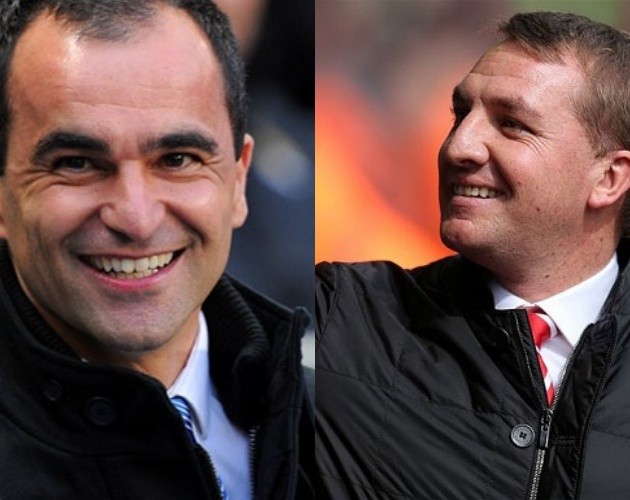 We’re into the Barclays Premier League Match Day 8, and as usual, we’ve some cracking EPL Fixtures coming up to satiate our ravenous need.

It’s a great time to be a Manchester United fan. The Red Devils are top of the Premier League table after 110 weeks. And they are riding high on momentum, aren’t they?

#MUFC are TOP of the Premier League after 110 weeks… but can they stay there? http://t.co/2DrhrFIq74 pic.twitter.com/s7YMpHlKWv

United travel to London to face Arsenal in the Premier League – a fixture steeped in rich history and strong rivalry.

Manchester City will be looking to bounce back after their disappointing 4-1 defeat to Tottenham last week.

The Citizens face Newcastle, who are yet to register a win in the 2015/16 Premier League campaign.

All eyes will be on Chelsea, who must avoid further slip ups, when they face Southampton at home on Saturday.

Elsewhere, Aston Villa vs Stoke City fixture could be seen as an early relegation six pointer.

Let’s check out all the fixtures from Premier League Week 8:

Ahead of Week 8, Let us take a look at the Updated EPL Table after week 7 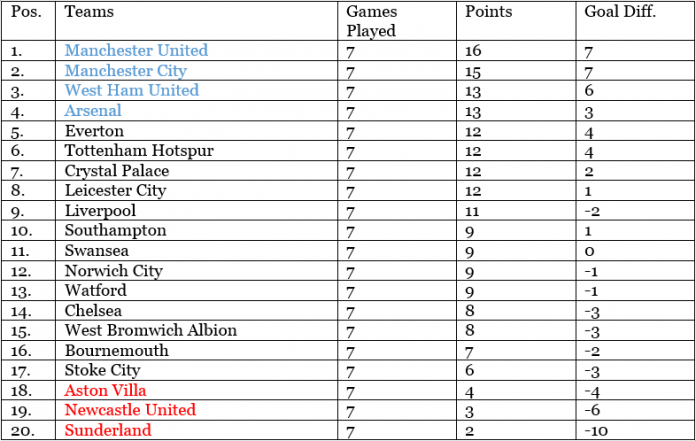 * Watford lost only once to Bournemouth in past Six meetings

* Norwich have scored 9 goals in last 4 games, winning two of them

* Chelsea have managed only 2 wins in the PL. 2 Draws. 3 defeats

* Five of the last Six Merseyside derby have resulted in draws

Manuel Pellegrini’s side will be looking to bounce back after their disappointing 4-1 defeat to Tottenham at White Hart Lane last week.

After winning first five games in a row, scoring 11 goals in the process, City seemed to have lost their way a bit, suffering 3 defeats from their next five games.

However, they are heading into the match with full of confidence, after winning 2-1 in Germany against Gladbach in the Champions League.

Sergio Agüero: Has now scored 15 goals in his last 15 starts in the Champions League for Manchester City #UCL

Newcastle on the other hand are still searching for the first league win this season.

The Magpies conceded two goals in the last 10 mins against Chelsea last weekend, which keeps them in the relegation zone with only 3 points on board.

With only two wins in the league, Chelsea need a dramatic revival from here on, if they are serious about challenging for the title.

And, by the look of things, it seems Jose Mourinho is saddled with more problems than finding a solution to counter it.

It’s hard to point one particular issue that has plagued Chelsea at the moment.

Chelsea: Have now conceded at least twice in 7 of their 10 competitive matches this season #UCL — WhoScored.com (@WhoScored) September 29, 2015

Some of the players haven’t looked in great shape, while Mourinho’s team selection has come under scrutiny.

Plus, there is his tendency to blame everyone except himself hasn’t bode well with senior players in the dressing room.

Southampton meanwhile have struggled for consistency this season, but they are well capable of pulling out a shock result. And they couldn’t have picked a better time to face the Champions!

Liverpool breathed a sigh of relied after picking up three points against Aston Villa, however, it hardly ensures Rodger’s job is safe for now.

In such a competitive season like this, Liverpool cannot afford to drop points in high profile fixtures like the Merseyside derby.

Liverpool have failed to beat Everton at the Goodison since Rodgers took charge of the club. It’s time he needs to win big games to infuse confidence among the players.

Everton have been playing brilliant football under Martinez this season. Romelu Lukaku has been in tremendous form this season, and has been directly involved in 5 of Everton‘s 10 Premier League goals this season.

In recent years, Arsenal haven’t challenged United directly for the Premier League title, but it is still being one of the most anticipated fixtures in any season.

The rivalry between the two iconic clubs has waned down a little, as United have largely dominated the fixture in recent years.

Plus, the lack of charismatic players (read as leaders in the side) meant this fixture have lost its old grandeur. 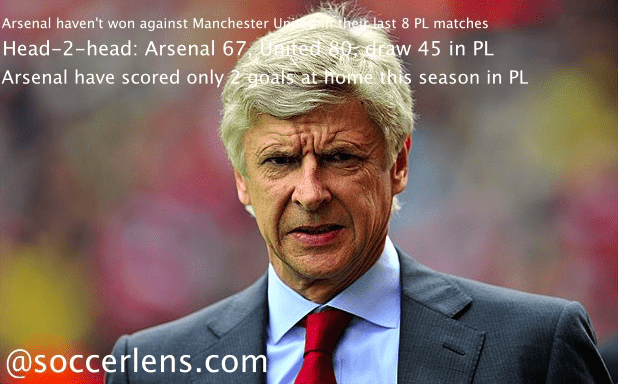 Arsenal have failed to beat United in their past eight Premier League games. Can they break the jinx on Sunday?

The Gunners have been highly frustrating to watch this season. While, they have produced some fascinating brand of football in patches (like victory against Leicester), as a whole, they’ve lacked consistency.

Also, they are heading into this fixture on the back of a yet another defeat in Europe. On the other hand, United are riding with momentum at the moment.

There are still concerns with the brand of football being practiced under Louis van Gaal, but the Red Devils have been effective enough in picking up points.

Let me know me your Match Day 8 predictions below…