We move into the Round 14 of the Barclays Premier League, and once again, we’ve some cracking games to look forward to this weekend.

Jamie Vardy is just one goal away from creating a new record in the Premier League. He has already become the first English player to have scored in 10 consecutive games, and should he score one more on Saturday, he will break Manchester United legend Ruud van Nistelrooy’s record in the Premier League. And guess what? Leicester’s opponent this weekend? Manchester United.

Arsenal, fresh from the Champions League victory in midweek, will be looking to bounce back in the Premier League, when the Gunners travel to Carrow Road to face Norwich on Sunday.

Manchester City face a tricky fixture against Southampton, while Jurgen Klopp will be hoping to register his first league win at Anfield, when the Reds play host to Swansea.

However, the pick of the bunch being Chelsea’s visit to White Hart Lane, where the Blues face one of the league’s in-form teams, Spurs, who haven’t lost at home this season.

Let us check all the fixtures from Premier League Week 14:

Ahead of Week 14, Let us take a look at the Updated EPL Table after week 13 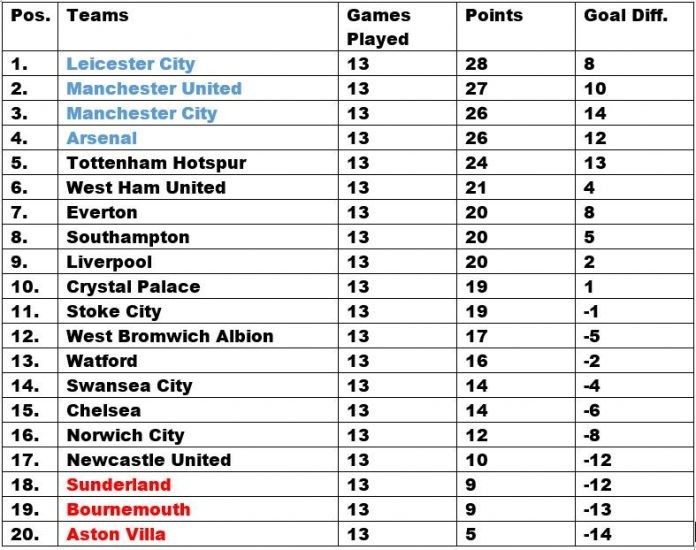 * Sunderland are undefeated against Stoke City in their last five games

* Bournemouth are without win in their last 7 Premier League matches

* Newcastle are undefeated in their last 5 matches against Crystal Palace

* Man City have won their last 5 home matches against Southampton

To prove you know your stuff and to win a pretty penny in the process, head to Betfectand get one over your mates and fellow users by wagering money on the games.