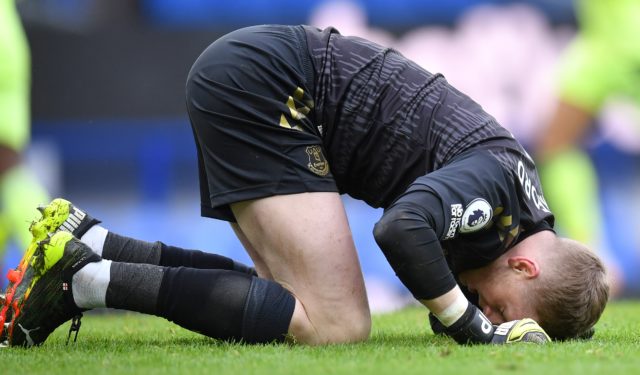 Everton will face Manchester City in the Premier League on Wednesday night at Goodison Park.

The Toffees are heading into this game on the back of a disappointing 2-0 defeat against Fulham. They are up against the Premier League leaders who have won 16 games in a row in all competitions.

Ahead of the match, Ancelotti revealed yesterday that striker Dominic Calvert-Lewin won’t take any part in the game. The England striker is still not yet fully fit, but he is expected to return soon.

However, the likes of James Rodriguez, Jordan Pickford and Allan could return to the side.

Ancelotti also hinted that Josh King, the January signing from Bournemouth, needs more time to get adopt tactically at Everton. He is unlikely to start against Pep Guardiola’s side but could make the bench.

Pickford, 26, returned to training this week, and he is likely to replace Robin Olsen.

Yerry Mina could replace Mason Holgate at centre-back, while Michael Keane is almost certain to start in his customary position. The versatile Ben Godfrey is likely to take the right-back duty with Seamus Coleman making way for him.

With Allan fit again, the former Napoli star is likely to come into the side in a three-man midfield alongside Abdoulaye Doucoure and Tom Davies.

In the forward department, Ancelotti could recall Alex Iwobi into the side alongside Richarlison and Rodriguez up front.