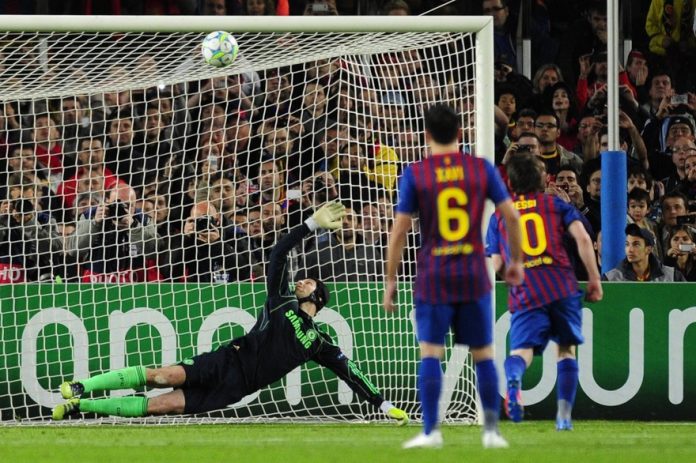 As a Chelsea player, Petr Cech was arguably Premier League’s finest during his time. The Chelsea legend has fond memories of his side’s nail-biting Champions League encounters against Barcelona and says it was a pleasure to keep successive clean sheets against Lionel Messi.

He shared his thoughts in a recent talk on Chelsea’s match day program ahead of the club’s Champions League group stage match against Rennes.

He was quick to remind everyone what a classy goalkeeper he was in his prime, with Messi only finding the back of the net against him after he moved to cross-town rivals Arsenal. He said “It took him a long time to score past me – 10 games in fact as I was an Arsenal player when he eventually did.”

“He missed penalties. I made saves, he hit the post, but he never scored past me at Chelsea. It was a pleasure to keep a clean sheet against him.”

One moment stands out in the Czech’s memories. The remarkable semi-final 2nd leg draw at Camp Nou that secured Chelsea’s place in the Champions League final on aggregate, particularly when Messi’s penalty struck the crossbar.

Speaking of the incident he said: “I was thinking about what he could do, what he would do. So my strategy was to wait and wait until I could see where he was going to hit it. So when I moved the way he was going to strike the ball, he knew he had to go high to beat me – but he went too high and it struck the bar.”

Well, we all know how Chelsea’s campaign turned out to be, as they shattered Bayern Munich’s hopes of winning the Champions League on home soil.

He also remembered how teenage Messi was on every Chelsea players’ minds during the 2005/06 Champions League Round of 16 games, a tie Barca eventually ended up winning before winning the tournament. “It was when Lionel Messi was announcing himself, he was only 17 years old, but everyone could see what a talent and a threat that he was”, he added.

You can read the full interview here on Goal.com.

What Is Petr Cech up to now?

After spending four seasons at London neighbors Arsenal, Cech returned in June 2019 to the club where he won four Premier League titles, as a Technical Advisor.

His role is to support the Chelsea coaching staff as a performance strategist and help facilitate strong ties between the youth academy and the first team.