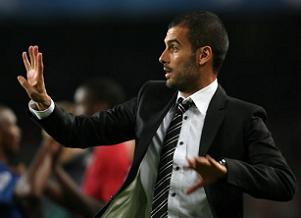 It was 16 months in the waiting but on Saturday night Pep Guardiola and Barcelona experienced their first home defeat in La Liga and it was to the most unlikely of opponents.

Newly promoted Hercules came to Camp Nou with more hope than expectation but left this great stadium with the 3 points after a stunning 2-0 victory over the reigning champions.

After having 75% of possession and 16 shots on target the Barcelona front three, who maybe short on height but high on talent, of Villa, Messi and Bojan, who was replaced by the equally short Pedro, just could not find a way through the Hercules defence.

It was a stunning result for the away side that saw both their new signings Nelson Valdez, who scored both goals, and David Trezeguet play well and trouble the Catalan sides defence throughout.

This defeat has brought about the return of a question that was being asked of Guardiola’s team in early 2009, what is his Plan B?

The player who was to be the answer to this was expensively recruited for €46 million plus Samuel Eto’o from Inter Milan, he was of course Zlatan Ibrahimovic. But after a fall out with the coach he has been deemed surplus to requirements and has been shipped out on loan to AC Milan.

After one season at the Camp Nou it was decided, with the arrival of David Villa, that the big Swedish number 9 could be sacrificed for the sake of dressing room harmony, even after he was able to score 21 goals from 41 games.

The criticism of Ibrahimovic has been that he disappears in the big games, like the Champions League semi-final when he was static for 70 minutes against Inter, but he is a player that scores goals and could even be classed as a bit of a flat track bully.

His purchase was to give the Barcelona attack another option and with his ability he would fit into the natural passing game of the side also. If we can’t play through a team we can always launch the ball to Zlatan to hold up and bring others into play.

With Ibrahimovic now at AC Milan and Barca chasing the game on Saturday it was the defender Gerard Pique who was sent up to play at striker.

The back-up plan has not changed its just the personnel and more difficult challenges will lie ahead. Can Guardiola really believe the use of a central defender in attack will bring the success and the support of the board of Barcelona or will he rue sending his Swedish striker away.