Premier League clubs Chelsea and Manchester City are being investigated for their alleged attempt in signing Brazilian superstar Neymar before he joined Barcelona.

Neymar’s transfer to Barcelona from Santos has been riddled with controversy; the money paid by Barcelona for his signing is still under investigation.

According to reports from AS, Judges of the Audience Nacional, have asked both Chelsea and Manchester City to offer them information about the financial offers they made to gain the services of the player.

The Judge have requested the clubs, including Real Madrid and Bayern Munich, to provide them the “copies of bids of proposals for transfer” they made to sign Neymar from Santos back during 2009-2013.

La Liga giants Real Madrid have informed the magistrate that they’ve offered €45m Euros, while Bayern claimed the club never made any formal approach for the Brazilian star.

According to market valuation, the cost of the transfer should be around €83.3m, whereas the operation was completed under Sandro Rosell for €57.1m. The transfer value has been raised to €94.8m due to the prosecution. 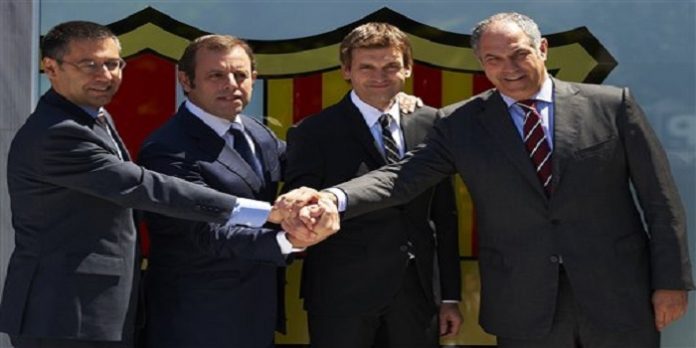 Obviously in the end the deal didn’t materialised, but as per several reputed journalists, United still hold a strong interest in signing the 23-year-old.

Neymar has a contract till 2018, and according to Spanish outlet Mundo Deportivo, the Brazilian is not going anywhere and is expected to stay at Nou Camp for his entire life.

“We are currently working on Neymar’s contract extension, and I don’t think there will be any type of problem. I have no doubt in my mind that Neymar will spend the rest of his life at Barcelona.”

In absence of Lionel Messi through injury, Barcelona are now heavily reliant on Neymar and Suarez to deliver. Neymar was excellent last Saturday, but couldn’t prevent Barcelona from losing 2-1 against Sevilla in La Liga.

He hasn’t travelled to play with Brazil for the upcoming World Cup qualifiers, as he misses out through suspensions.