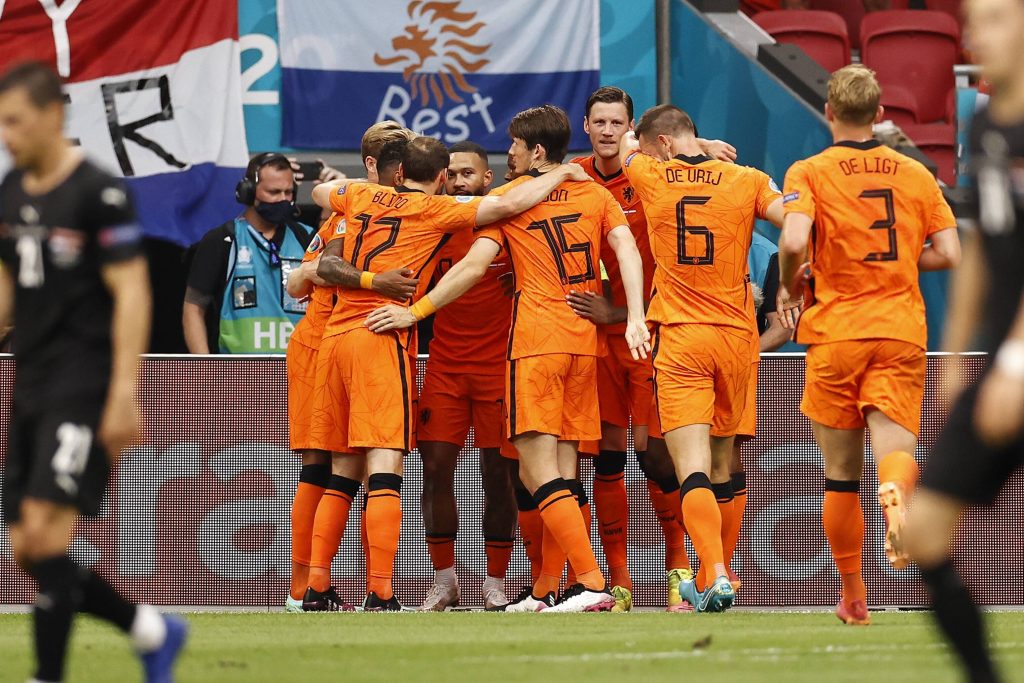 Netherlands sealed top spot in their group after comfortably seeing off Austria in their second game of Euro 2020 on Thursday.

The Oranje had the better of the first half and were awarded an early penalty after a VAR check.

Replays showed that David Alaba stepped on the foot of Denzel Dumfries, prompting the referee to point to the spot. Memphis Depay stepped up and slammed it into the bottom left corner.

Alaba’s difficult start continued later when he miscontrolled a throw-in which allowed Depay to get into the box. However, the former Manchester United man could only hit the side netting.

Just before half time, Depay got another chance, and it was one that he really should have taken.

Patrick van Aanholt floated a wonderful ball over the top to Wout Weghorst, who squared to his strike partner. But from six yards out, he somehow skewed his effort over the crossbar.

The first half ended with the score at 1-0. Austria went in at the break fortunate not to be further behind, having had no attempts on target.

Things didn’t improve after the break for Franco Foda’s side, and they weren’t far away from going further behind on the hour mark.

Weghorst nodded a corner across to Stefan de Vrij, whose header was kept out. The rebound fell to fellow centre-back Matthijs de Ligt, but his strike was deflected wide.

But it wasn’t long before they doubled their lead. Depay slipped a ball through to Donyell Malen, who unselfishly squared for Denzel Dumfries for his second goal of the tournament.

It was a comfortable evening from then on for Netherlands, with Austria not threatening to score until the final ten minutes.

The game finished 2-0, securing Netherlands’ spot at the top of the group. Austria go into their final game against Ukraine knowing that a point should be enough to see them through.

Maarten Stekelenburg (6/10) – The 38-year-old had what was probably the easiest game of his long career. Had pretty much nothing to do.

Denzel Dumfries (8/10) – Another fantastic showing from the powerful right-back. Been involved in every Netherlands goal so far.

Stefan de Vrij (7/10) – Kept a very blunt Austrian attack at bay. Close to getting a goal.

Daley Blind (6/10) – Hardly ever tested. Given an easy ride by the Austrian frontline.

Patrick van Aanholt (7/10) – A threat down the left hand side. Played one excellent pass for Weghorst, which should have resulted in a goal.

Georginio Wijnaldum (7/10) – A bright display in the middle of the park. Helped control the game throughout.

Frenkie de Jong (8/10) *MOTM* – Excellent on the ball and made several driving runs through the middle. A great performance from a top player.

Memphis Depay (7/10) – Confidently stuck his penalty away and played a great through ball in the lead up to the second. Missed a sitter in the first half.

Wout Weghorst (7/10) – Linked up well and unlucky not to have a couple of assists.

Daniel Bachmann (6/10) – Couldn’t do anything about either of the goals. Made one excellent save from De Vrij.

Stefan Lainer (5/10) – Sometimes struggled against Van Aanholt down his side. Couldn’t follow up his goal last time out with any attacking contribution.

Aleksandar Dragovic (5/10) – A difficult evening for the centre-back, albeit put under relentless pressure.

David Alaba (4/10) – A clumsy challenge to concede the penalty, and was lucky not to be punished again a few minutes later. Not his finest hour.

Martin Hinteregger (5/10) – Made some decent runs out from the back, but these led to nothing. Could have defended better.

Andreas Ulmer (5/10) – Contributed nothing going forward and failed to deal with Dumfries.

Christoph Baumgartner (4/10) – Failed to create anything at all before being taken off.

Konrad Laimer (4/10) – Way off his best stuff. Couldn’t cope with the Dutch midfield.

Marcel Sabitzer (4/10) – Often seemed to find himself with nowhere to go when he had the ball. Couldn’t create anything.

Michael Gregoritsch (4/10) – Hardly got a touch on the ball. Subbed off on the hour mark.