According to reports from Italian media outlet Corriere Dello Sport, Roma midfielder Miralem Pjanic could leave the capital based side in the summer transfer window. It is also well known that the Bosnian is a reported Manchester United target. 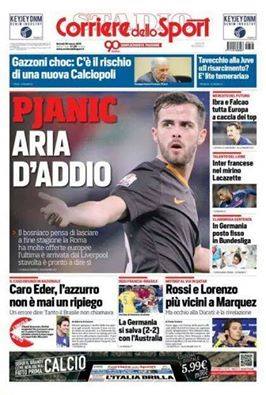 The report states that Liverpool had approached Roma for the player in the January transfer window and the Anfield side want to sign the highly rated 24-year-old as a replacement for departing captain Steven Gerrard in the summer.

Another Italian Media Outlet Calciomercato had reported earlier that a €30m bid for Pjanic could be tabled and the midfielder would be offered a salary of €4m in wages annually. However, French side Paris St Germain are also interested while Bayern Munich manager Pep Guardiola is also a huge admirer of the dazzling youngster. Barcelona are also keeping tabs on the player’s situation.

However, any potential suitor for Pjanic will have to give the player Champions League Football. The nimble footed dazzling set piece taker had signed a contract extension with Roma in the summer and his current deal runs till 2018. Liverpool are current fifth in the Premier League standings and are in danger of missing out of a Champions League berth for next season.

It will be thus interesting to see where Pjanic goes next or stays with Roma next season. Will the Bosnian sign for the Anfield side? Let us know in comments below.