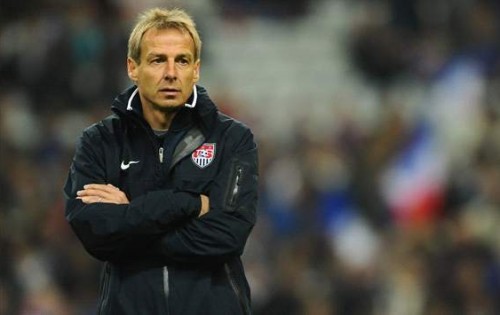 Coming off an extremely unlikely, and equally historic, triumph against Mexico in their final friendly tune up, Team Jurgen Klinsmann now confidently enters the first of two CONCACAF World Cup qualification matches against Jamaica… but the road through Kingston looks increasingly treacherous.

While the Jamaican national team (nicknamed the “Reggae Boyz”) has never managed to best Team USA in the past 24 years of their squaring off, the “boyz” have also managed to never lose a qualifier to the Americans when playing on home soil. In fact, in the four games played between the two teams in Jamaica, the USMNT has not only never won, but they’ve accumulated an unimpressive tally of only one total goal scored. Just another reminder of the Red, White and Blue’s traditionally anemic offense… which is hopefully just a remnant of Team USA’s gone by, and not a foundation of the squad currently under construction.

In any case, doesn’t this winless drought sound pretty familiar? Like maybe a straight to DVD version of the Mexico on Mexican soil ultra-defeated streak just very recently snapped by Team USA (and just very recently mentioned above)? It’s definitely nowhere near the same level of footballing futility, but it’s still a stat that raises eyebrows, and definitely one that paints a significantly more daunting picture of Jamaica as legitimately dangerous adversaries.

As a result, Team USA needs to enter into this game with the same thick skin and unwavering composure that they demonstrated at Azteca Stadium last month, maybe even more so. We all said that last friendly against Mexico was about as competitive/intense as a meaningless game can get, but it’s still only a mere imitation of the real thing; actual qualification matches with vital points at stake.

Going without injured players Michael Bradley and Landon Donovan, the Americans’ have to look for offensive creativity and game-controlling stability from someone else on the roster, but who should they look to?

Clint Dempsey is a world class player and is certainly the most proven goal scoring threat on this team, but will he be in top match shape/form is the real question. He’s coming off a messy Fulham row that has left him without competitive first team football for quite some time now, and that’s never an ideal situation for a player hoping to influence a major international match. He could be a bit rusty, or he could be Dempsey… but not knowing just adds that much more pressure on the rest of the team to step up.

Another area of major importance is the central midfield. Michael Bradley has always shown incredible fitness and a definite willingness to breakup opposing team’s play in his center-mid position, but more recently he’s also emerged as a premier game-controller and bona fide offensive playmaker. He fulfills so many roles for the national team that looking for just one player to replace him is probably asking a bit too much, so instead, look for a combination of Jose Torres and Jermaine Jones to fill the void. Torres brings controlled ball movement, good passing and some potential for playmaking to the position, while Jones can play more of that “destroyer” role due to his better physicality and speed (and he can also contribute on the playmaking side of things, already has a goal and an assist for Schalke 04).

Jozy Altidore probably gives the best mix of talent and experience up top, but giving him an appropriate strike partner will be key. This is where either Dempsey (if he’s not used as a winger) or Terence Boyd/Herculez Gomez can step in. While both Boyd and Gomez look solid in recent club play, I imagine Boyd has probably earned another look after his solid performance in previous qualification games. In addition, since scoring goals will be one of the hardest parts of Team USA’s mission against Jamaica, having two forwards and Dempsey stepping into the center of the field from the wing will (ideally) give them more opportunities to score.

Lastly, and maybe the team’s strongest performing unit right now, is the goalkeeper and back line. Tim Howard is always pretty solid, so not much to say there, but the intended backline (some featuring in the Mexico match) of Carlos Bocanegra and Maurice Edu in the middle and Fabian Johnson and Steve Cherundolo on the outside looks pretty solid too.

Edu did well as a converted central midfielder against El Tri and Bocanegra is one of the longest tenured players on this team, so although there’s not a whole lot of speed here (something to consider against the likes of Darren Mattocks and Omar Cummings), there’s definitely a good deal of experience and savvy (Geoff Cameron provides depth here too, and maybe deserves a start here or as a defensive midfielder). Johnson and Cherundolo have also both played on the outside in numerous games now, and can definitely be effective overlapping on what will likely be a winger duo of Brek Shea and Clint Dempsey. With all those names on the flanks, it definitely becomes one of the most interesting sections of the field to watch. Keep an eye on the winger/backs interplay this Friday.

All in all, this is a game that Team USA can and should win if they really want to show us they’re on track for a meaningful 2014 World Cup push. While a loss wouldn’t kick them out of qualification contention by any means, it does make the remaining matches in Qualies that much more desperate. Kilnsmann needs to set the tone now, and make it count when the games do too.