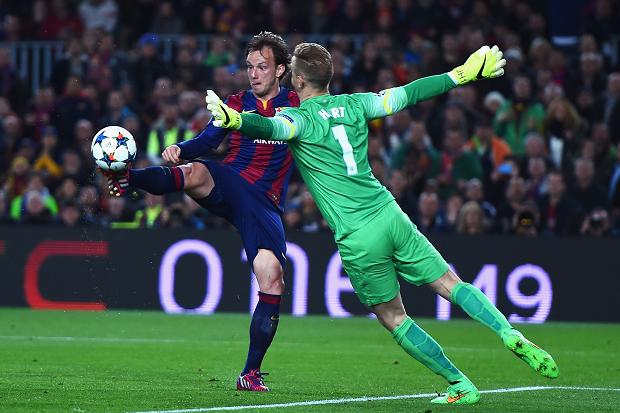 Two players left their mark on this match, Messi was magnificent and Joe Hart was heroic, but ultimately, England’s last remaining representative in this seasons Champions League were deservedly eliminated at the expense of Barcelona, who qualify for the quarter finals for a record eighth year in a row.

It was a nervy start to the evening for Manchester City, Kompany had his pocket picked within the first five minutes by Dani Alves who played in Neymar, his shot struck the inside of Joe Hart’s near post and spun across the goal mouth and out to safety.

Messi’s performance was a joy to behold, his influence growing with every touch, every shimmy, every swivel. Playing as if having a point to prove after that late penalty miss in the first leg, it was his range of passing that impressed too. A wonderful counter attacking move led to the opening goal, Messi bringing the ball from the halfway line to the edge of the box before providing a delightful cross from the right onto the chest of the unmarked Ivan Rakitic, he lobbed the ball over the onrushing Hart into the net for his first ever goal in this competition. Yaya Toure was the man who failed to track the run of Rakitic, so often City’s most influential player on the big occasion, the difference between his and Messi’s performance was colossal.

There was still time for Suarez to hit a post before half time after Neymar played him through City’s disjointed backline, the match becoming ever closer to being over as a contest before the interval.

The night required the big guns of Man City to stand up and produce a world class display after their recent slump against Burnley, only one man did, Joe Hart was head and shoulders above his teammates. Messi, Suarez and Neymar all tried time and again in vain to add to Barcelona’s advantage but were thwarted. Hart was on a one man crusade to protect his goal and by the time Pique slipped Neymar through for a one on one in injury time you knew what the outcome would be, Hart with yet another stunning block.

Manchester City will rue a missed Sergio Aguero penalty which could have been the catalyst for a remarkable and unlikely comeback, however he struck it too central and at the perfect height for Ter Stegen to paw it away to his right.

It was an occasion that Joe Hart lit up the Nou Camp, however City’s vast array of other stars failed to shine along with him. Manuel Pellegrini may well be clinging onto his job and such is the recent decline, second place is no longer a certainty. Defeat at home to West Brom on Saturday would surely test the patience of the Etihad faithful.

Messi’s star however, burns brighter than ever, right on cue for Barcelona, a date with Real Madrid on Sunday and the opportunity to explode on the big stage once more.