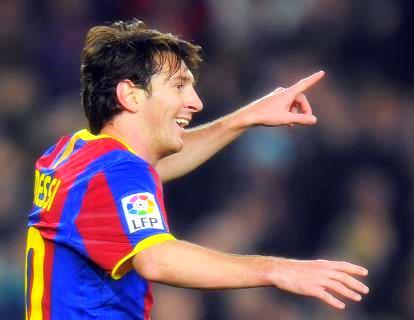 The game against Almeria this weekend confirmed Barcelona’s eight point lead over rival Real Madrid before the El Clasico. What was notable in that game was that Lionel Messi scored his 46th and 47th goals for this season.

47 goals in one season in all competitions is a record that was achieved by the Brazilian Ronaldo back in 1996/1997 – which was equaled by the little Messiah already last season.

This season Messi has a minimum of nine games to become the outright leader in top goal scorers.

Last season, Messi also managed to equal Ronaldo record from the same year of scoring 34 league goals for the club. This season, Argentina’s little man is only five goals short of repeating that feat.

Messi has become the top scorer for Barca in European competitions with 33 goals.

Pep Guardiola has rightly asserted that Messi is the best player he had ever seen after Barca won the 2009 UEFA Super Cup.

Messi is on a contract with Barcelona with a buy-out clause of €250 million and he make around €9.5 million a year. His current contract runs until 2016.

The El Clasico will be a chance for Barca to make it six consecutive wins in a row against the capital club. It will also be a face-to-face for the league’s two scorers to get their noses in front to become the top scorer. Messi’s 29 goals this season is matched by the Portuguese ace Cristiano Ronaldo.