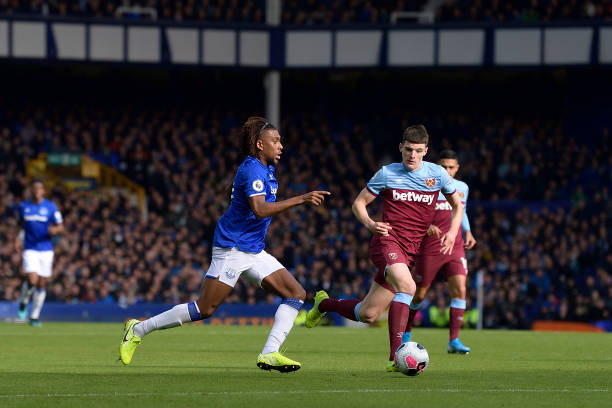 According to The Athletic, Everton manager Marco Silva saw England international midfielder Declan Rice West Ham United’s major weakness ahead of their clash at the weekend, and he asked his players to exploit space either side of him.

The Toffees ran out 2-0 winners at Goodison Park thanks to sublime goals from Bernard and Gylfi Sigurdsson, ending their run of four consecutive Premier League defeats.

Given Rice’s lack of pace, Silva decided to deploy the Brazilian and Alex Iwobi as two number 10s, with the former coming in regularly from his position on the left to create a numerical advantage the Hammers star struggled to cope with.

Everton ran the visitors ragged in the middle of the park, and that limited their chances in the final third.

Rice, like most of the West Ham players, was below par, and Manuel Pellegrini’s men had no answers to the threats the hosts posed at both ends of the pitch.

While the victory boosted the Toffees’ confidence following their woeful start to the campaign, it dealt a blow on the Hammers who have now suffered back-to-back league defeats for the first time this season.

It was all down to the meticulous planning Silva embarked on during the break, though, with the Portuguese dumping his preferred zonal marking system at defensive corners for man-marking, while also demanding that Rice’s weaknesses be fully exploited.