Dutch World Cup star Daley Blind has dropped a major hint that he could join Spanish giants Barcelona in the summer. The 24 year old spent a few days in the Catalan capital with his friends as he enjoyed his vacation after the World Cup in Brazil.

Spanish daily Mundo Deperotivo has reported that the technically versatile player who can play either as a left back or as a central defensive midfielder flashed the ‘Victory’ sign with his fingers. Blind also jokingly said “Mind your step” to a journalist at the airport near the conveyor belt. 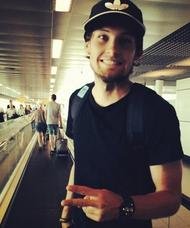 We had earlier reported that Blind’s agent Rob Jansen had earlier said, “At the moment there is nothing concrete. But the rumours of today could very well be tomorrow’s reality”.

“There are many clubs interested in Daley. We’ll have to wait and see what happens when the transfer market shakes up.”

The player would seamlessly fit into Van Gaal’s ideology at United and with Micheal Carrick sidelined for up to three months following ankle surgery, the Red Devils are in dire need of a defensive midfielder who can screen the back four.

Moreover with Patrice Evra joining Juventus and Alexander Buttner also leaving Old Trafford, United will be well off with another left back apart from the young Luke Shaw.