Catalan newspaper Sport have been covering the Juan Cuadrado transfer saga for the past couple of months. Barcelona were thought to be interested in him as they see him as a possible candidate to replace Dani Alves.

Cuadrado enjoyed a brilliant World Cup campaign in Brazil that leaves Fiorentina in a strong position to command a high transfer fee for the Colombian. The Serie A giants are demanding a fee in the region of €42m, which Barcelona are somewhat unwilling to pay. And now their chances of landing him are fading for two major reasons – first, Luis Enrique, the new manager wants to continue with Alves and secondly, Manchester United are offering a better pay package. 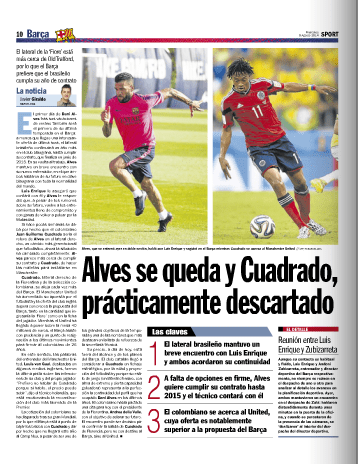 Alves wants to fulfil his contract that runs out till 2015 while it seems like Enrique wants to continue with the Brazilian full-back. In such a scenario, Manchester United could have an upper-hand in signing the highly rated right-back.

According to reports from Sport today, Manchester United have offered €40m to land the 26-year-old. We reported yesterday that the Red Devils had offered better wages than what Barcelona could offer and Sport reckons that Old Trafford could be Cuadrado’s next possible destination.