One of the most-anticipated ties in the second round of this season’s UEFA Champions League kicks off at the Etihad Stadium on Tuesday as defending Premier League champions Manchester City host Spanish La Liga giants Barcelona.

Manchester City head into the first leg off the back of a dominating 5-0 thrashing of Newcastle United on Saturday to gain two points on league leaders Chelsea.

Earlier that day, Barcelona were handed a shock 1-0 loss at home to Málaga which saw them fall four points behind leaders Real Madrid.

James Milner is the only player absent through injury to Manuel Pellegrini.

Bigger than the absence of Milner though is the suspension of Yaya Touré. The Ivory Coast midfielder was greatly missed during the African Cup of Nations last month and his absence in midfield on Tuesday will surely be a huge loss to the hosts.

Thomas Vermaelen is the only absentee to Luis Enrique and the former Arsenal captain has yet to make his debut since joining Barcelona in the summer, due to injury.

The Spanish side would set a Champions League record by reaching eight consecutive quarter-finals if they progress from this one. The second leg at Camp Nou is on Wednesday 18 March. 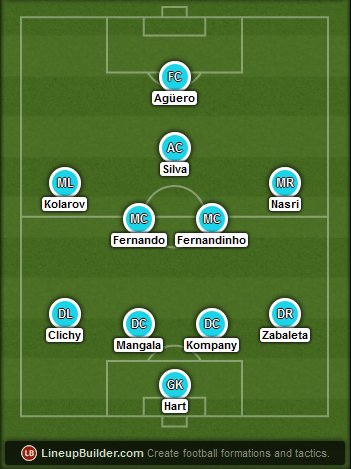 With no Yaya Touré we cannot see Manuel Pellegrini naming a very attack-minded lineup. Both left-backs could start this with David Silva moving back into the middle, playing behind Sergio Agüero. James Milner’s absence is a loss on the right-side of midfield so we think Samir Nasri plays here unless Bacary Sagna and Pablo Zabaleta make a surprise combination. Fernando and Eliaquim Mangala would be the obvious players to call the weak points for the Premier League side. 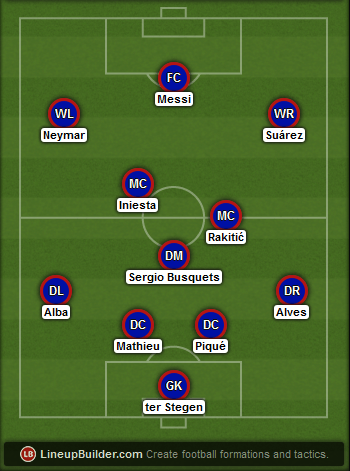 Marc-André ter Stegen has been Barcelona’s Champions League goalkeeper for all six of their group games. If Jérémy Mathieu doesn’t start in the centre of defence, then Marc Bartra and Javier Mascherano are available. Ivan Rakitić and Andrés Iniesta will run the centre of midfield and have the fearsome front three to supply.

Lionel Messi vs Vincent Kompany
Some claim the Manchester City captain has lost a step this season – we’ll see how true that is when he faces the toughest test of his season against Lionel Messi. Alongside the Belgian is Eliaquim Mangala who has not made an impressive first season so Barcelona may look to exploit him, similar to how they got the better of Martín Demichelis in a minute of madness 12 months ago that essentially killed the tie after the first leg.

Neymar vs Pablo Zabaleta
Another defender that has more low points this season than any previous is right-back Pablo Zabaleta. The Argentine will be greatly tested against a Neymar who has been in fine form this season. The Brazilian forward has scored 17 goals and set up four more in 21 La Liga matches this season. He scored three goals in five group stage matches too. Manchester City only kept one clean sheet in the group stage, ending a nine-match run without one in this competition. Pablo Zabaleta has been prone to conceding free kicks in dangerous positions when opponents have tried taking him on this season. On the opposite winger, Luis Suárez failed to score in both Premier League matches versus the champions last season.

Sergio Agüero vs Barcelona defence
Sergio Agüero had his best match on Saturday since coming back from injury in 2015. Manchester City will need their striker to be in top form if they’re to come away with something from this match. Don’t expect too many attacking players on the pitch for the hosts as they look for goals from counter attacks and set pieces. David Silva is their to create chances for the Argentine and the Spanish playmaker was in fine form at the weekend.

Prediction: Manchester City 1-2 Barcelona
The weekend’s results suggest that Manchester City come into this match on the better form but Barcelona’s surprise loss ended a nine-game winning streak – they’re still amongst the best teams in football right now. No Yaya Touré, and with Fernando not being the best since he came to England, the same for Eliaquim Mangala, we cannot see the Premier League side keeping a clean sheet in the first leg.