Dani Alves’ contract situation has been a major talking point in both the Spanish and British press over the last number of months, with the Barcelona right-back’s future still unclear.

With his deal at the Camp Nou expiring at the end of the current campaign, the Brazilian has been threatening to leave Luis Enrique’s men if he is not handed a new long-term deal to his liking.

Despite the newly crowned La Liga champions currently serving a transfer ban, it appears that the Catalan powerhouses are not willing to be held to ransom by Alves.

In the latest plot twist, the attack-minded full-back has hit out at the club and issued a final threat of leaving if they do not yield to his demands.

“I may have two feet in the team but I’ve also got one foot, my body and nearly my head out of the club,” The Guardian report Alves as saying.

“I would like to stay here but not at any price. Not only in terms of money but in terms of respect. If I’m not shown that respect, I’ll go to another club.

“I won’t accept that they underestimate what I have given to this club. They haven’t given me the value I deserve.

“From 7 June, I’ll announce my future. My intention was not to speak but I haven’t been respected with a lot of silly things. It’s gone too far. I don’t want anybody to influence my decisions. My future only depends on me.

“I have been quiet for too long but they have not shown me any respect. I have a limit and I have reached it.” 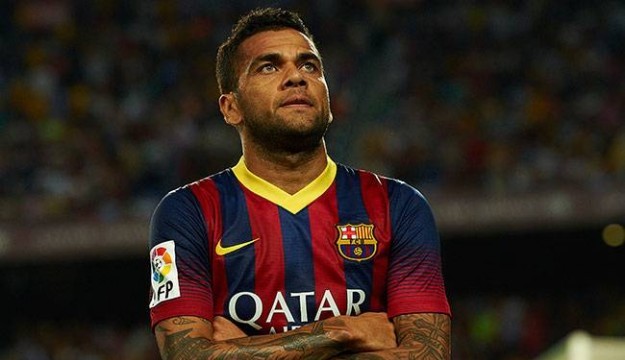 The timing of the South American’s comments, given that Barcelona still have the Champions League and Copa del Rey finals to play in a bid to complete a momentous treble, will leave the club not impressed.

Despite Alves being in good form, having turned 32 it appears that the Catalan club are starting to think of long-term alternatives and are not willing to offer the veteran Brazilian the multi-year extension he craves.

Alves’ comments will be of interest to a host of other European clubs that have been keeping tabs on the situation since he was able to sign a pre-contract agreement in January.

One of the regular teams that are linked with a move for the Barcelona star is Manchester United and it now appears like a perfect time for Louis van Gaal’s men to strike.

The Old Trafford outfit have already started the summer rebuilding process with the acquisition of Memphis Depay, but the Dutch wonderkid will not be the last new face arriving at the club ahead of next season.

Although central defenders and midfielders are also on the wishlist, a right-back of Alves’ quality would be a shrewd acquisition.

With Van Gaal losing faith and patience with Rafael, Antonio Valencia has been first choice in the role this season and fared well in a role not fully natural to him.

Despite the Ecuador international being a competent option for the side, someone of Alves’ experience and record of success would be an impressive addition.

A proven winner, the South American is still one of the best players in his position in world football regardless of his age and would be a significant upgrade for United this summer.

Also available on a free transfer and clearly frustrated by Barcelona’s reluctance to cave into his demands, it appears like the perfect signing for the Old Trafford club to make their move.