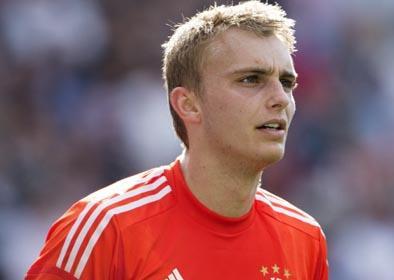 Manchester United’s number 1 target to replace David De Gea, Jasper Cillessen, has today stated that he has not received any offers for a move to Old Trafford. The Ajax goalkeeper, who starred under Louis van Gaal in the Netherland’s run to the semi-finals in the World Cup finals in Brazil last year, looks like he is set to stay put in his home country.

His comments to Amsterdam-based daily Het Parool, as relayed here by Goal.com, don’t make for great reading if you are a Man United fan.

“I’ve read that this weekend I have spoken with Van Gaal.  But the last time I did was during the Sports Gala late last year. My management has heard nothing.”

De Gea looks set for a move to Real Madrid, and was dropped by Van Gaal for United’s Premier League opener against Tottenham Hotspur on Saturday. Argentine Sergio Romero, who was signed in the summer, started and played pretty well, but there is still place for another top goalkeeper at the club with Victor Valdes set to be shown the door as well.

Ajax manager Frank de Boer has said that the club will hold out for as long as possible, but admitted that they may be forced Cillessen to sell if United break the bank for him.

He was quoted as saying:

“To make it clear, Jasper is getting more expensive by the week, although there are certain figures that we can’t turn down.”

The Eredivisie season kicked off at the weekend, with Ajax beating AZ Alkmaar 3-0 and Cillessen keeping a clean sheet.