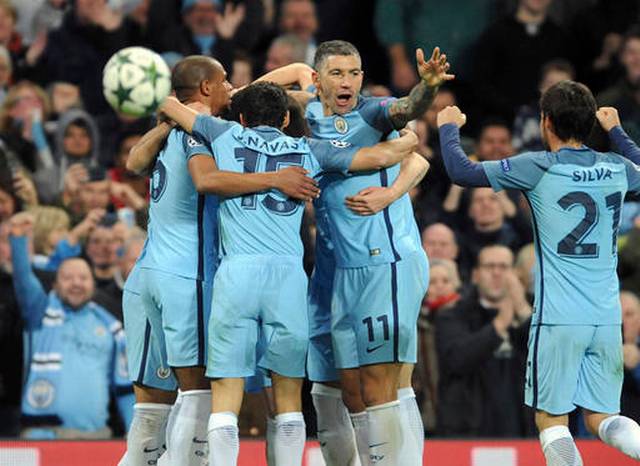 Manchester City turned on the style at the Etihad Stadium to overcome the five-time European champions Barcelona for the first time in their history. The hosts fully merited the 3–1 win, as fast counter attacks and transitions high up the pitch landed a famous continental win for Pep Guardiola’s men.

Last night’s win more than atoned for the Citizens’ 4–0 loss at Camp Nou on the last matchday.

But it wasn’t smooth sailing for Guardiola’s side as they were the first to concede in the match. The opening half hour saw both sides approach the game in a measured way. City gradually intensified their front pressing which made it difficult for Barça to build up from the back.

Before Lionel Messi’s 21st minute opener, Barça goalkeeper Marc-André ter Stegen had more touches on the ball than any City player. City forced the Blaugrana back, consequently ter Stegen saw a lot of the ball as Barça looked to recycle possession and play their short passing game from their own third to the middle third.

That was the plan for City as their 4–1–4–1 system allowed a four-man front pressing. Kevin De Bruyne started the game in a slightly withdrawn position on City’s left, possibly in a bid to allow him to recover possession and thread dangerous final passes while his team-mates ahead pressed the ball.

In the image below, we can see the areas on the pitch where both teams lost possession. City are marked with the red dots, Barça with the blue ones. City attack from left to right, Barça from right to left. It is clear from the graphic how much more Barça lost possession inside their own half compared to City. Guardiola’s plan on the night worked to perfection as his side suffocated Barça, and prevented them from playing their preferred game. 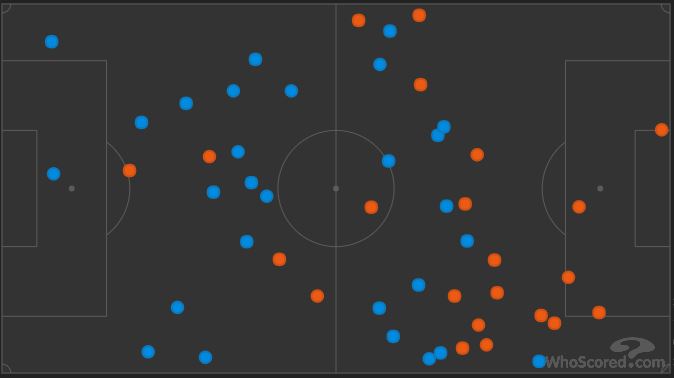 Due to the way they were set up, City naturally left spaces behind their front five. Barça rarely got into those areas, owing to a lack of access forced by City’s central pressure. David Silva, Sergio Agüero, Raheem Sterling, De Bruyne and Gündoğan all covered the spaces in front of Barça’s last line. As a result, Sergio Busquets had to drop in between the centre backs, which further disconnected Barça’s attacking trio of Messi, Neymar, and Luis Suárez.

On the occasions Barça bypassed the home side’s front press, City had the excellent Nicolás Otamendi to tidy things up. Otamendi’s front-footed nature is seen as “rash,” compared to the composed ball-playing nature of John Stones, but it proved to be the perfect way to stop Barca’s trio of attackers to combine in the final third.

Otamendi recorded the game’s highest interceptions, and despite committing a few fouls, he barely lost his concentration throughout the 90 minutes. Otamendi’s fellow Argentines at the back, in Pablo Zabaleta and goalkeeper Willy Caballero, perhaps helped him; he combined 25 times with them during the game.

City’s tactic to play the first pass long in the second half was the game changer. Without dallying in their own third and keeping in mind Caballero’s weakness on the ball, the Sky Blues opted to take a more direct approach in the second half with the game tied at 1–1.

That approach paid dividends as City’s directness forced Barça into mistakes inside their own half. One advantage of playing direct with a high front press is it triggers a lot of second balls which can be won high up the pitch. City hit all the right buttons, as Barça found themselves 3–1 down via a combination of being unable to deal with the hosts’ direct football and high pressing, forcing the frequent mistakes from the visitors and possession turnovers.

City’s win that had the Etihad at its bouncing best sees them close the gap on group leaders Barça to just two points. With games against Borussia Monchengladbach and Celtic coming up, finishing as group winners is not beyond the Citizens, provided Barça drop points in their next two matches.