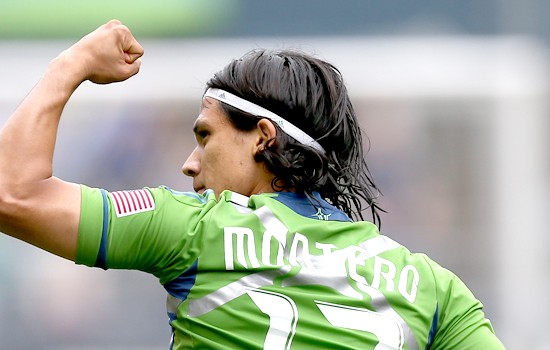 With the recent EPL debut of Houston Dynamo product Geoff Cameron an undeniable success (he received “Man of the Match” honors in Stoke City’s scoreless draw against Arsenal), we now look to the next batch of MLS-ers poised and postured to eventually make similar hops across the pond. Here goes:

Although Montero got off to a slow start stats-wise this season, his play over the past month or so has ignited an absolutely surging Seattle Sounders side. A two-footed forward with a definite knack for stylish, yet direct finishing, Montero has always flashed an incredibly deep pool of raw talent.

Offers from European leagues are not necessarily a new thing for Montero, but in previous years he felt the MLS was the best place for him to grow into his capabilities. Having scored 10 goals in his last 8 appearances for Seattle, I’d say he’s matured quite nicely as a player. If he wants it (which he does), the Premier League looks inevitable.

Brought over from Colombia as a teenager to be one of FC Dallas’ designated players, fans have always expected Castillo to eventually come into his own and become a force to be reckoned with on the attack. Boasting maybe the fastest straight line speed in all of Major League Soccer, Castillo has the kind of athletic toolbox that can overwhelm defenders with natural ability alone.

Although dynamic and exciting in his style, Castillo struggled to find the net during his teenage years as a MLS pro… but the tide seems to be turning. With a better supporting cast on the roster (including David Ferreira and an everyday redeeming Brek Shea), Castillo has now netted 5 and created 3 this season. Even more encouraging? 3 goals and 1 assist in his last 4 contests. He’s trending in the right direction, and people are noticing.

After being selected second overall by Vancouver in the 2012 MLS SuperDraft, Mattocks still probably entered the league as the number one talent in terms of raw ability. He stands 6 feet tall, can literally jump over opposing players, and possesses legitimate top end acceleration; all attributes that made him one of the deadliest finishers in college soccer during his 2 year stint with Akron.

He’s scored 7 goals for a middling Vancouver Whitecaps this year, and looks easily capable of scoring more as he settles in and develops better chemistry with his teammates. He could still work on his build up play and distribution, but the one thing he has had no trouble with, is the most important at the forward position… scoring goals. A little bit of growing to do, but he will be a major talent.

We all know about Brek Shea by now, but his dip in form after a grueling campaign last season (and last off season) has definitely cost him some points. He is still a dynamic player, bringing great size and playmaking ability to FC Dallas and the US men’s national team, but he needs to prove his very recent return to form is permanent.

Overstretching yourself with too many matches and footballing responsibilities is something less likely to plague him as he fully develops as a professional and gets to know his limitations, but it’s still something that quickly cooled the white hot hype he generated a mere year or two ago. He has too much ability to be ignored for long, however, and interest from Europe will definitely continue to rise as he proves he is now a more experienced version of the player who burst onto the scene in 2010.

Graham Zusi (27 years old, Sporting KC): A central midfielder who can create and distribute. He didn’t make the top list because he’s a couple years older than most of the other “rising talents” (meaning he’s likely closer to his peak than the others), but he’s definitely a solid player, and absolutely one that can make the switch to European competition.

Chris Pontius (25 years old, DC United): Pontius was slowed by a broken leg last year, but still managed to put away a more than respectable 7 goals before the injury. This year he already has 11 in the nylon bank. His production is certainly not in question, but coaches and scouts aren’t wowed by his athletic tools (meaning his speed, size, etc.). Even so, one fact remains; Chris Pontius scores goals.

This article is written by Hamish Nieh from the Finishers Forum.