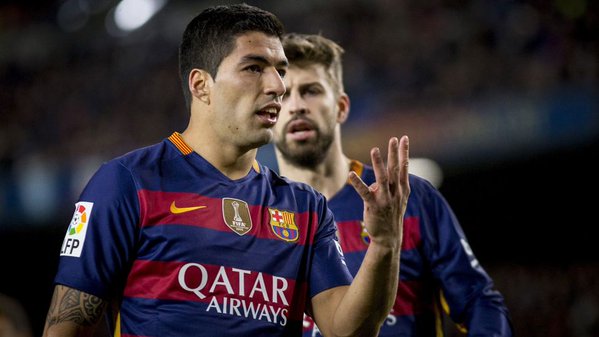 The La Liga champions won the tie 4-1 in a physical match, where eight Espanyol players were booked during proceedings and two sent off.

“Once in the tunnel, Barça’s No.9, Suarez, Luis, while the Espanyol players were coming up the stairs, waited for them and shouted at them on various occasions.

“It provoked a confrontation between players of both clubs and the present security guards had to get involved, as did coaches of both teams.”

Barcelona legend Andreas Iniesta was quick to play down the incident in his post-match interview, saying any heated argument is part and parcel of a local derby.

I thought it was Luis Suárez waiting for the Espanyol players in the tunnel? https://t.co/lo6HxcsgTv

Well, what to say about Suarez – this guy is a genius, but as we all know, there is another ugly side of his nature that leaves a bad remark on his personality. His footballing career has been defined by several incident which has damaged his personality, resulting in lengthy suspensions.

He was banned for four months from all competitions in 2014 for biting Italian defender Giorgio Chiellini during Uruguay’s World Cup match with Italy.

He was also given a 10-match ban for biting Chelsea’s Branislav Ivanovic during Liverpool’s Premier League match in 2013.

Furthermore, he was accused of making racial comments towards former Manchester United defender Patrice Evra that created a lot of furore in the English press.

Up until now, Suarez has stayed out of trouble since joining Barcelona in 2014. He has shifted all his focus into football, and has been simply phenomenal on the pitch. Despite his lengthy absence last season, he still managed 16 goals and 14 assists in 27 La Liga games, and this season, he has already bagged 15 goals and three assists in 16 league appearances.

It remains to be seen whether Suarez gets any punishment from the Spanish Federation. Spanish newspaper AS says Suarez is likely to receive 1-2 games ban for making provocative comments.