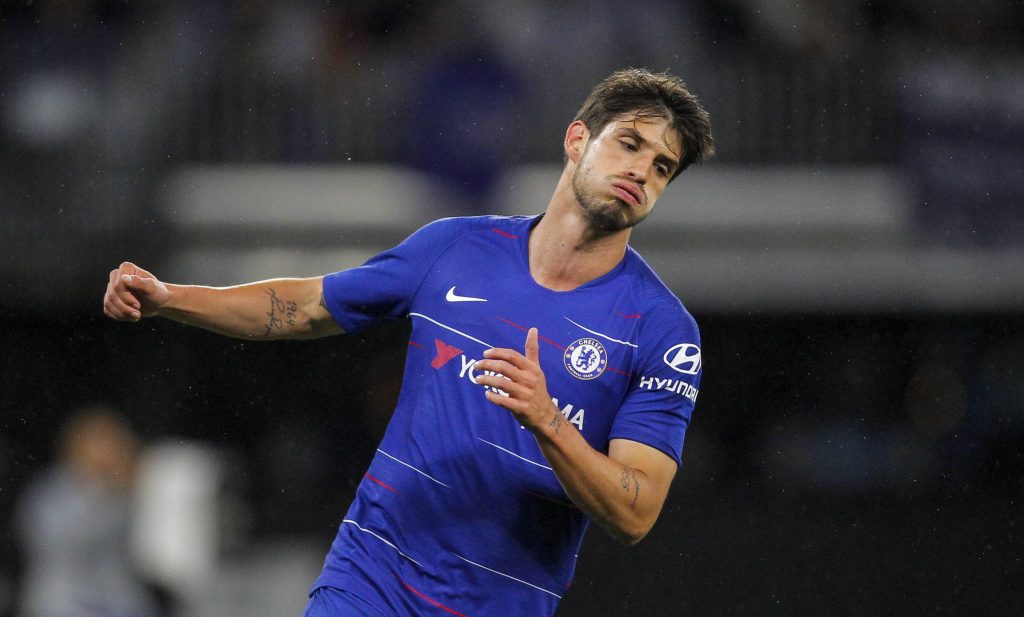 Chelsea signed upcoming Brazilian playmaker Lucas Piazon from São Paulo on a pre-contract in 2011, paying a reported fee between £5-10 million depending on multiple clauses.

After winning the Chelsea Young Player of the Year in his first season, midway through which he obtained a work visa which made him eligible to appear for the senior team, Piazon was expected to rise to the top quickly.

Dubbed the ‘new Kaká’, Piazon scored in his second Chelsea appearance when his side faced Paris Saint-Germain in a pre-season friendly. The teenager then made his competitive debut in the League Cup clash against Wolves, where he got an assist.

After another appearance in the competition, he made his Premier League debut against Aston Villa, in a match where he assisted a goal and won a penalty, but failed to convert it.

Then, in the January transfer window of 2013, he was sucked into the vast loan-network of Chelsea, which he never managed to escape until his contract expired and he joined Braga on a free transfer.

In the subsequent eight years that Lucas Piazon spent in the Chelsea books, he travelled to five other countries in seven different loan spells. They were: Málaga, the mandatory Chelsea loan to Vitesse (who share a very close technical relationship with the Blues, especially in terms of receiving loanees), Eintracht Frankfurt, Reading, Fulham, Chievo Verona and Rio Ave.

If this was a one-off, you might think that the player turned out to be a massive disappointment and was jockeyed around until he had to leave. But that is not the case – travelling the world on loan is the Chelsea way.

Take the example of Matej Delač, who was the Blues’ longest-serving player when he left in 2018 after spending eight years at the club and making precisely zero appearances. After joining as a promising young goalkeeper who had been called up to the senior Croatian setup at the young age of 17, Delač too failed to live up to expectations.

But, his early loan-career also shows the flaws in Chelsea’s system. In his first three spells in the Netherlands (Vitesse, who else?), the Czech Republic and Portugal, he made just one competitive appearance. Thereafter, in Serbia, Bosnia (twice), Croatia and France, he did make more appearances, but his chances at the highest stage were pretty much non-existent by this time.

These two and others such as Baba Rahman, Kenedy and Charly Musonda are examples of promising youngsters who failed to live up to expectations and were eventually fed to the loaning void, but there are many others who were specifically signed to be transported here and there.

At the moment, Chelsea have 17 players out on loan – yes, seventeen. This is still a great deduction from the 41 players that were away from Stamford Bridge in 2018/19, mainly due to the pandemic situation.

These include a selection of flops such as Tiemoué Bakayoko, Ross Barkley, Michy Batshuayi and Danny Drinkwater, promising youngsters such as Malang Sarr, Ethan Ampadu and Ruben Loftus-Cheek (on second thought, only the first two) and some old friends including Victor Moses and Davide Zappacosta (remember him?).

But then, they also have players such as Jake Clarke-Salter, Danilo Pantić, Jamal Blackman and Nathan Baxter in their books.

Surely, these aren’t players who have a real chance of making it into the Chelsea first-team anytime soon, so why aren’t they getting offloaded?

The answer is because Chelsea do not just look for talented potential first-teamers when they sign someone. You see, they don’t always pay for a footballer, sometimes, they invest in one.

Christian Atsu is a prime example of this. He joined Chelsea for around £2.75m from FC Porto in 2013, visiting the likes of (surprise, surprise) Vitesse, Bournemouth, Málaga and Bournemouth. Finally, he joined Newcastle, initially on loan in 2016, in a deal which was made permanent for £6.75m.

There are some more well-known examples of this investment system, such as Thorgan Hazard. The Belgian winger came to Chelsea from Lens for less than £500,000 in 2012. After a two-year spell in his native Belgium, he was sent to Borussia Mönchengladbach, with the deal being made permanent in 2015 for £7.4m. Chelsea also earned an additional £1.2m in this deal thanks to the initial loan fee that Gladbach agreed to pay.

Some other examples of this include Mario Pašalić, who was bought for £2.25m and sold for £13.5m after five loans, and Tomáš Kalas, who was loaned around for nine seasons, before finally being sold to Bristol City for a profit of about £3m.

Essentially, here’s how the system works: Chelsea buy a player, loan him to Vitesse for a year or two (that’s a mandatory step), send him around to a couple of other clubs where he is sure to get regular first-team minutes and also improve his quality and value.

Eventually, one of the clubs he plays for might be interested in making his deal permanent, or some other sides would have scouted him. That is a guaranteed profit. In the worst case, nobody wants the player on a permanent deal and his contract runs out, but even here the Chelsea losses are minimal since loan fees and subsidised wages mean that their post-transfer dealings involving the player are always profitable.

The question is – why do Chelsea do this?

Ever since the Roman Abramovich-led takeover, the availability of cash hasn’t been a real problem for Chelsea. But, since the introduction of FFP (Financial Fair Play) in 2010, they haven’t had a free hand while using it.

So, they use their loan army as one of the combating measures. It also serves as a substitute for additional matchday revenue which the Pensioners are losing out on owing to their lack of stadium expansion at Stamford Bridge.

For the players, though, this system can have mixed effects. All those who are a part of the Chelsea loan army are almost certain to be marshalled around for a few seasons, meaning they have to start fresh every time.

This can have a toll on certain players and frustrate them mentally, but for others, especially those who are underperforming, this can provide a fresh opportunity to find their true form again. And, to a select few like Reece James and Tammy Abraham, it can prove to be their doorway to the first team.

Most other clubs cannot possibly even imagine doing this. Bar the big billionaire-owned teams, every side has to focus on the present and immediate future, so they simply cannot afford to spare a few million quid to invest in something that could even potentially lead to a loss. Even at best, the profit would never be worth it after waiting for five years, so that money is much better spent on a footballer who can immediately join and bolster the squad.

While Chelsea aren’t the best-run football club when it comes to spending £200 million on new attackers or identifying future stars who are present at their very club (think Kevin De Bruyne or Mohamed Salah), they certainly are the industry-standard when it comes to marshalling a loan army, mostly because they are the only side who possess such a huge loan system.

But, it works for Chelsea, and it will continue to do so. Lucas Piazon was a promising youngster who was signed for the first-team – his first few loans were for his own betterment only and therefore his loss was a developmental failure. But, most other members of the loan network are nothing more than investments for Chelsea, and they always will be expendable in that sense.

However, FIFA have introduced a reform to the loan system in general, which will see only six players aged over 22 allowed to be loaned out internationally after the 2022/23 season.

Although this should not have an overly adverse effect on their loan army, they will have to plan further when distributing their resources, and sending out 40 players on loan might not be so feasible.

Begun, the Loan Wars have.