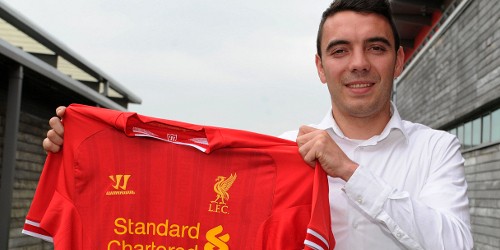 Liverpool have completed the signing of Iago Aspas from Celta Vigo, subject to international clearances.

The 25-year-old striker has penned a long-term contract at the club, after successfully completing his medical, as confirmed by the club’s official website.

Aspas, who scored 12 goals and provided seven assists in 34 appearances, was one of the star performers for Celta last season helping the La Liga outfit avoid relegation on the final day of the season.

The versatile player who had offers from Valencia, Swansea City and Portuguese and Italian clubs can play as a front man or out wide, has become the third signing of the summer following the capture of Manchester City’s defender Kolo Toure and Sevilla’s promising youngster Luis Alberto.

Meanwhile, Liverpool are set to announce their fourth signing of the season very soon as a deal has been agreed already for Sunderland goal keeper Simon Mignolet and the Belgium international will undergo a medical within Wednesday.

Ever reliable The Times journalist Tony Barrett said on Twitter, that the “deal is all but done” and the medical will be held either on Tuesday or later.

Many thought that the signing of Mignolet will put a question mark over Pepe Reina’s future at the club, but the Spaniard, who is constantly linked with a move to Barcelona, has reiterated his desire to stay at the Anfield club.

Manager Brendan Rodgers echoes the voices of Reina, saying it was important to have competitions in every position in the squad. The former Swansea boss said as quoted in the Daily Express:

“Our squad was very thin last year. It’s very important we have competition in every position and that wasn’t always the case.

“Pepe is a fantastic goalkeeper but Simon Mignolet is a player that has done really well. He’s also part of an emerging Belgium squad that has come into a golden era.”

Meanwhile, reports circulated in the Twitter-sphere that Liverpool have made a breakthrough in negotiations for midfielder Henrikh Mkhitaryan, but the Shakhtar Donetsk player has moved to cool such talks on his personal Facebook page.

“I am happy to see that people show keen interest in my career but I would like to ask all not only to refrain from making comments but also to prevent the spread of unverified and false information,” he said as noted by the Metro.

Rodgers is keen on further improving the squad and making necessary recruitment in the coming days to challenge for the top four spot next season.