Liverpool had gone through a sort of mixed emotion last week. The club celebrated the signing of Southampton defender Dejan Lovren but had to cancel the deal for Loic Remy, because of the player’s medical concerns.

Lovren becomes the fifth player to have joined Liverpool this summer and the Merseyside club are expected to do more business in the month of August as well. The signing of Lovren puts a deep question mark over the future of defender Daniel Agger. The Danish defender, signed by Rafael Benitez, struggled last season to get regular games and could be on his way out of Anfield, with Barcelona thought to be showing a keen interest in him. 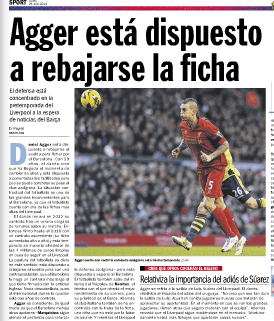 Yesterday, Catalan newspapers published that Barcelona are considering Agger as one of the defensive options, should they fail to sign Marquinhos. After signing Lovren, Liverpool might be willing to sell Agger for around €15m, and the good relations between the two clubs can help facilitate the move. Barcelona however are concerned with the player’s injury history, as well as his high wages.

Now, Sport claim today that should Agger change his colours over the course of the past one month, he would likely to reduce his wage demands to join one of the prestigious clubs in the world.

Agger has been a long servant of the club and his experience could come handy in the Champions League. But, Liverpool manager Brendan Rodgers might have other ideas.