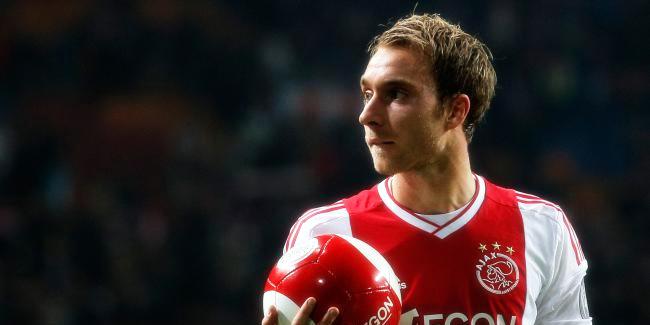 Ajax midfield prodigy Christian Eriksen has become a top priority signing in the summer for Liverpool and Tottenham after the Denmark ace made it clear that he won’t be signing a new contract at his current club.

The 21-year-old has refused to come to terms with new deals offered to him and has expressed his desire to leave the club after the end of the season.

His preferred destination is England and was linked with host of English clubs including Arsenal and Manchester United, while La Liga giants Barcelona also registered their interest at some point of time.

Arsenal view Eriksen as a player who performs the similar role (advanced role behind the strikers) currently carried out by Santi Cazorla or Jack Wilshere. Likewise, United have Wayne Rooney or Shinji Kagawa to cut out the similar task, while interest from the Catalan giants seems to have died down.

Thus, it leaves the door ajar for Liverpool and Spurs to grab the opportunity of signing him. Ajax are demanding a fee in the region of £14 million for the player, who has one year left in his contract, but Tottenham are confident are snatching him up with a much lower price, in around £8 million.

According reports, both the clubs are sending their scouts to watch him almost week in week out. A senior Ajax source was quoted in The Evening Standard:

“Christian wants to play in the Premier League and we think he will do well there. The club had discussed the option of keeping him until the end of his contract but it makes sense now to sell.

“Liverpool and Spurs are scouting him almost every week. Arsenal are no longer interested and Man United are not on the scene. The club will not let him go cheaply so there is a long way to go but it seems likely he will move to Tottenham or Liverpool.”

Spurs could provide him a Champions League platform next season (highly likely they will finish in top four) which something Liverpool probably won’t be offering at the moment. But, there are other ways of tempting a young player like him.

Liverpool didn’t have Champions League to offer to Luis Suarez, the former Ajax star, but still they managed to convince him to join the Anfield club.

Many suggest that Spurs defender and former Ajax player Jan Vertonghen’s relationship with Christian Eriksen could prove influential in bringing him to White Hart Lane.

However, same can be said with Liverpool too, as player like Daniel Agger (his international team mate) and Suarez (former team mate) could use their influence and persuade him to join Anfield.

One thing is certain that he would be cheapest and the most attainable option in the market in summer. Thus it will be a fascinating battle to see who wins the race to sign the highly rated midfielder in the end.