Liverpool hopes fans will guide them to Europa success 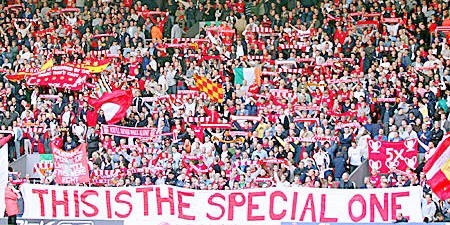 Liverpool are looking to turn their two goal deficit into victory against Zenit St Petersburg on Thursday night in the Europa League tie and are relying on famous Anfield support to be their 12th man for this game.

The Reds manager was at Anfield as a part of Jose Mourinho’s coaching staff in 2005, when Luis Garcia’s ghost goal gave Liverpool victory in the Champions League semifinal and knows very well what the Kop fans are capable of.

It was one of the greatest nights of European football in Liverpool’s rich history and Rodgers is looking for similar response as the club look to keep their season’s hopes alive.

Anfield has been quite subdued in recent years mainly because they had very little to cheer for but on occasions like this they can take the boisterous shape as well. Rodgers has urged the fans to be their guiding star in the hours of need. He was quoted in the press:

“The atmosphere at Anfield was as good as you will ever get and the crowd will be so important for us now.

“The legend of Liverpool has been based on nights like these – big games and comebacks.

“If we can get that result, then that for sure is another signpost in terms of where this group is going.”

The spiritual ground of Liverpool has witnessed historic European nights over the decades and skipper Steven Gerrard has echoed on the same lines of his manager.

Gerrard himself experienced many unforgettable Anfield nights in his career, and now seeks help from the fans. He said on the club’s official website:

“I already know they will be up for the game but if I could urge them to get into the ground as early as they can and make as much noise as they can, then it will make our job an awful lot easier because they are so important.

“The fans have got a massive part to play. They are called the 12th man and this is an occasion that the players need them more than ever, especially after the result we got in the first leg.”

The Spaniard therefore is aware of the power of Anfield crowd and has issued a rallying cry like his manager and skipper. He said ahead of the match:

“We have to show character from the beginning, especially in the first 15-20 minutes to get the people right behind us, but then they will lift us in the weak moments as they always do.

“The fact it is a night game makes it different. Supporters come to the game more excited.

“It’s difficult to explain, but there’s a different kind of atmosphere.”

It is simply unique.