Liverpool midfielder, Philippe Coutinho is keen to re-unite with his friend Neymar, at Barcelona.

The Spanish giants are ready to push through a £30 million transfer in January.

According to reports in Spain, Barcelona are ready to sign the Liverpool star this season, after an injury to Lionel Messi and the shortage of midfield options. 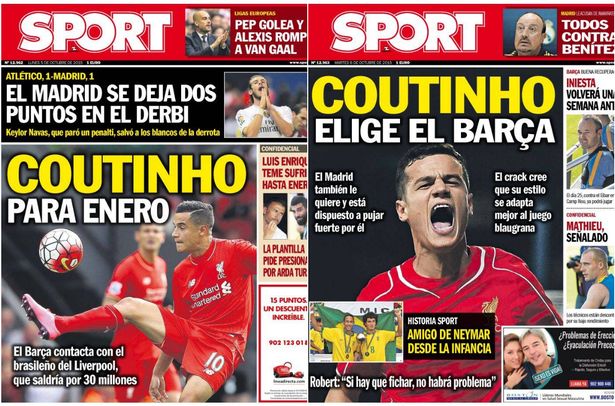 Furthermore, Barcelona star Andres Iniesta is 32 and the Catalans are keen to secure his replacement right away. Coutinho is of a similar mould to that of the Barcelona hero and is expected to replace him at Camp Nou.

“Coutinho’s new agents have a good relationship with the club”, said the report.

“They were close to getting a deal done a couple of summers ago. David Luiz, who has the same representative, admitted a few days ago that Coutinho was being tracked by Barça and that it was a good option for his career.

“Coutinho knows Barcelona – he played for six months at Espanyol – and is a close friend of Neymar. Their relationship means that Coutinho would strongly favour Barcelona were he to leave Liverpool.”

Despite signing a new contract at Liverpool. Coutinho is thought to be keen on a transfer, especially now that Barcelona are seriously interested. The Brazilian is close friends with Neymar and is keen to play with him again.

It is highly unlikely that Liverpool will part ways with their best player in the middle of the season. Furthermore, after having sacked Brendan Rodgers last week, Liverpool are set to appoint Jurgen Klopp as their new manager.

The German will want the best players to stay and it would be extremely uncharacteristic of John Henry and FSG to sanction a transfer in January.

In case Coutinho is determined for a move, the Brazilian might just have to wait until summer to get his wish.

Coutinho has previously claimed that he is not a fan of the English weather. Could that be a reason for his departure?