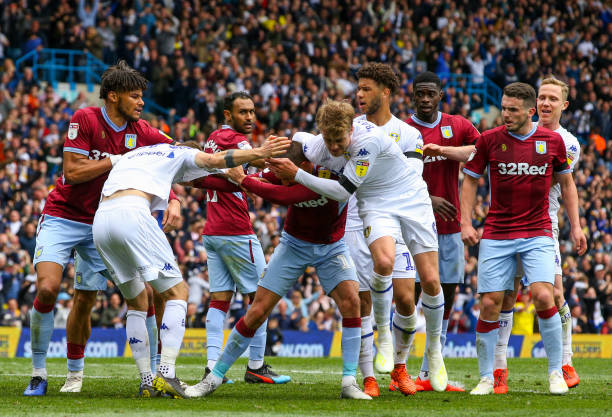 Leeds United striker Patrick Bamford was handed a two-match ban by the F.A in April after being charged with successful deception of a match official during a league game against Aston Villa at Elland Road last season.

Bamford fell to the floor, feigning injury after a fracas with Villa star Anwar El Ghazi.

The Dutchman was sent off by the referee, but his red card was later rescinded by the FA.

Replays showed that the Leeds star had dived to the ground, clutching his face despite no contact from El Ghazi, and he has dubbed the incident as the most embarrassing moment of his career.

“Probably last year against Villa, when I threw myself on the floor. I still think he (El Ghazi) touched me a little bit. But looking back at it, it wasn’t a fine moment,” Bamford told Sky Sports EFL Podcast when asked the question.

“To be honest, I got more stick, mostly from my mum and my sisters. So, it’s one of them where I had to say, you know what, if I could change it, if I could, I’d change it I think.”

What's your most embarrassing moment?

Patrick Bamford: Probably when I threw myself on the floor against Aston Villa last year 😬🙈

The match was Leeds’ penultimate league game of the season, and with both sides playing for automatic promotion and places in the playoffs zone, emotions ran high.

The hosts secured the lead in controversial circumstances, as they proceeded to score despite the fact that Villa’s Jonathan Kodjia was injured and remained on the ground during the build-up.

The goal sparked pandemonium, with players from both sides caught up in the fracas.

Leeds boss Marcelo Bielsa instructed his players to allow Villa score immediately after the kick-off, and it ended in 1-1, putting the second automatic promotion spot mathematically out of reach for them.

Nevertheless, Leeds and Bielsa were awarded the 2019 FIFA FAir Play Award as a result, and it has earned the Argentine a lot of respect.