Catalan newspaper Sport yesterday claimed that Manchester United are trying to lure Colombian defender Juan Cuadrado to Old Trafford with a better overall package. Fiorentina are demanding in the region of €42m, a fee that neither Barcelona nor Manchester United are willing to pay at the moment.

Cuadrado impressed during the World Cup and naturally top clubs are vying for his signature. Barcelona are trying to replace veteran Dani Alves and new coach Luis Enrique wants Cuadrado to fill his boots at the Camp Nou. 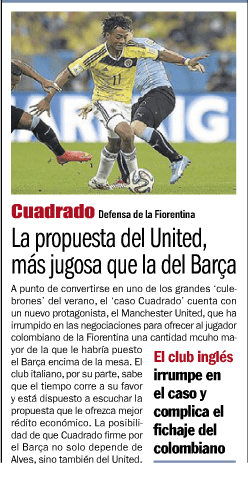 Yesterday, Catalan newspaper Sport claimed that Manchester United are planning to offer around €35m for the highly rated wing-back, while they will offer a better fee to the player’s agent.

Sport are covering this saga almost on a daily basis. They have covered a huge story on Dani Alves today, where it says, Luis Enrique wants to have a final chat with the Brazilian before making any decision whether he should be allowed to leave. In that long article, they covered a small segment on Cuadrado, which you can see above, where they add that Manchester United have offered a lucrative contractual terms, much better than what Barcelona had offered, which makes the Old Trafford giants a favourite candidate at this moment to land Cuadrado.