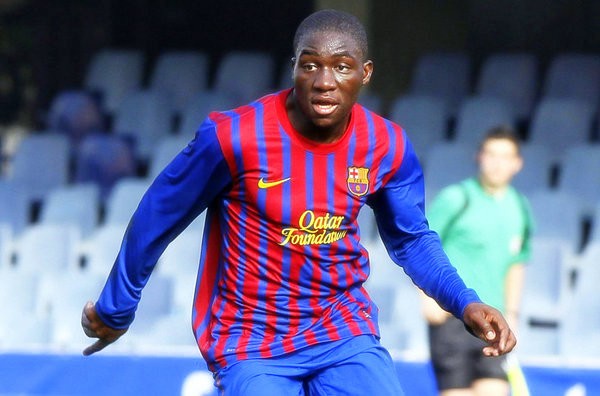 La Masia may have the fortunate knack of regularly producing and nurturing supremely talented footballers, but you’d think that even they would have had their decade’s worth of wonder-kids in Lionel Messi. You’d be wrong. Working his way through the Barcelona ranks is a player that the staff are getting equally as excited about, someone equally as prodigious.

At the tender age of 17, Marie Dongou is younger than your average powerhouse centre-forward, but that just makes his footballing aptitude all the more remarkable. The Cameroonian has been playing several years above his age group ever since he entered the World-renowned academy and has made quite the impression amongst those in the upper echelons of Barcelona with his phenomenal knack for goal scoring. He made his widely anticipated debut for Barcelona B in late January this year and it’s surely only a matter of time before he’s playing for the first team in La Liga.

The build of a weight-lifter, the pace of a sprinter and buckets of unbridled power, stereotypes yes, but truths nonetheless. In fact, the player is a stereotype in himself, the type of striker that makes centre-backs feel genuinely scared, the type of striker who’ll be 10 yards past you in the blink of an eye. A real centre-forward. But to label him as purely a physical specimen is to do the player a great injustice.

His standout quality is undoubtedly his eye for goal, Marie Dongou is a player who has found the back of the net at every level he’s played at. When combined with his aforementioned physical attributes and his creative movement and footballing intelligence you have a striker with seemingly infinite potential, or as his youth team coach, Oscar Garcia puts it “The kid has no limits, no ceiling, so long as he continues his development the way he is.”

You’d think that being only 17 years old and already being touted as the “next Samuel Eto’o” would inflate your ego somewhat, but Jean Marie Dongou is widely acknowledged as being comfortable with his footballing ability and very down to earth. Unlike many of his peers, he can’t be found on social networks like Twitter, declaring it not for him and deciding he’d rather focus on football.

Refreshing to hear from a player of his age and ability. His evident hard working attitude and humility will come in handy as he inevitably works his way further and further up the Barcelona ladder, such personality traits are surprisingly rare to see in a youth player, but are so vital if he wishes to make that final step a real success.

Although that step might still be a way off yet, it’s still possible to catch Marie-Dongou in action, to form your own opinion of him before he hits the big time. He’ll be featuring in this year’s NextGen Series, a competition designed to bring players like him to the fore and the young Cameroonian will also be on show for the Barcelona B team, where he has netted 1 goal in just the 1 appearance so far this season.

If Jean Marie Dongou can continue to improve and grow as a player then the comparisons between him and Cameroon’s biggest footballing superstar, Samuel Eto’o, are likely to come thick and fast. The two bear an uncanny footballing resemblance, and fittingly it was only thanks to a link that Eto’o created that Marie Dongou got the opportunity to enter La Masia at the age of 13.

The man widely accepted to be Africa’s most successful ever player may have found his heir, a man to fill his shoes once he’s gone, if not grow too large for them. Barcelona will have themselves a whole new superstar on their hands in the next few years, as they say, remember the name.