Republic of Ireland kick off their Euro 2016 campaign this evening against Sweden.  Both sides should look at this as a must win match with Belgium and Italy the other two teams in Group E. SmartBets odds comparison shows Sweden are slight favourites to take the 3 points but the Irish can’t discounted after a memorable qualifying campaign.

The Irish finished third in their group despite taking four points off World Champions Germany but progressed over Bosnia and Herzegovina in the playoffs whilst Sweden finished below Austria and Russia, beating Denmark 4-3 in the playoffs.

22 of Martin O’Neill’s side play their football in the top two tiers of the English football league system with the 23rd man being LA Galaxy’s Robbie Keane.  Only Shane Long played for a team in European competition this season and even then his Southampton side were eliminated in the qualifying rounds of the Europa League.

Keane is the main threat up front but Shane Long’s pace and movement off the ball could certainly be a factor for Ireland.  Not much expected of Stoke City forward Jonathan Walters.  Daryl Murphy has failed to score in 21 attempts at international level.

Séamus Coleman bombing on from right-back should add to Ireland’s attack, but Wes Hoolahan, Glenn Whelan, James McCarthy and Jeff Hendrick only have four goals between them in 156 caps.

Sweden have a lot more experience of Champions League and Europa League football in their squad – none more so than Manchester United target Zlatan Ibrahimović.  The 34-year-old needs three goals in Euro 2016 to tie Michel Platini’s all-time goalscoring record in the European Championships.  He faces two tough defences after Sweden’s opener.

Zlatan really is Sweden’s main threat as they don’t have a great deal of goalscorers elsewhere on the pitch – Marcus Berg should start alongside the legend but only has 10 goals in 38 caps at this level.  Celta Vigo’s John Guidetti is relatively inexperienced at this level and Kim Källström plays a more defensive role than he used to.

Former-Manchester City goalkeeper Andreas Isaksson is the Swedes numbers one. Oscar Hiljemark and Pontus Wernbloom are two solid central midfielders, whilst Sunderland’s Sebastian Larsson may also start.  There are a number of inexperienced players at international level in Erik Hamrén’s squad.

Defensively, Benfica’s 21-year-old Victor Lindelöf may start alongside the experienced Andreas Granqvist in the middle, whilst Norwich City’s Martin Olsson should start at left-back.

Neither side can really afford to lose this match given that both Belgium and Italy are expected to come through this group.  They may have an iota of hope as Belgium don’t score too many goals and this isn’t the best-looking Italian side from an attacking perspective.  Italy were also eliminated at the group stage of the 2014 World Cup. 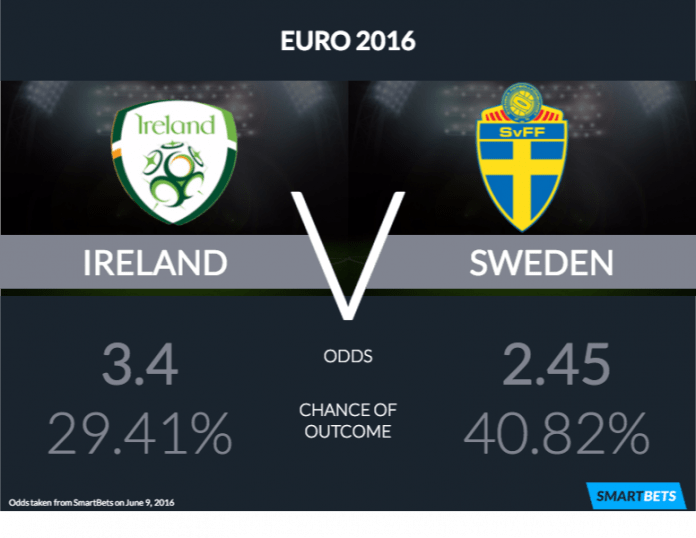 Robbie Keane, Jonathan Walters and Robbie Brady returned to training on Thursday meaning Martin O’Neill has his full squad to choose from for their opener.

Sweden have had no injury concerns heading into Euro 2016.

4 – Ireland are on a four-game losing streak at European Championships.

6 – Sweden are unbeaten in their six competitive matches versus Ireland (W4, D2).

11 – Zlatan Ibrahimović scored 11 goals in qualifying, including three in the playoffs.