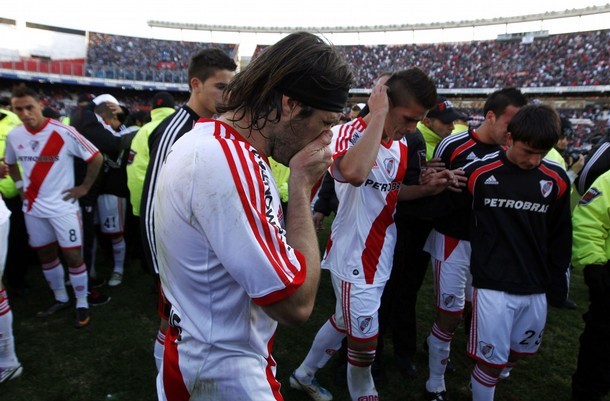 Argentine giants River Plate are enduring the bleakest period in its 110 year existence after succumbing to what seemed nothing more than an improbable assumption, relegation to the second tier of their domestic game. The thought of one of South America’s premier entities falling from grace  would have seemed an absurd thought, yet the old cliché of ‘anything can happen in football’ has certainly echoed its purpose. Bearing that in mind, Los Millonarios are not the first, nor the last, big name club to fall below the trap door.

Soccerlens takes a look back at some of the star studded clubs that have slipped through the cracks from their top tier leagues and into the lower echelons of their domestic game.

Where else to begin other than with South America’s wounded animal. Daniel Passarella was once idolised as a player at the Estadio Monumental Antonio, as well as across the whole of his native Argentina having lead his nation to their inaugural World Cup triumph on home soil in 1978.  Now he is being lambasted with criticism as the River club president is having the finger well and truly pointed at him for the club’s plight.

River failed to overturn a two goal deficit from their first-leg with Belgrano in Sunday’s promotion/relegation play-off, resigning them to National B. Playing at home, the team in red and white could only salvage a 1-1 draw with the game being called off a minute from time as trouble flared in the stands. The home supporters vented their anger, leading to 89 people being injured as trouble spilled onto the streets of Buenos Aires.

River have been Argentine champions a record 33 times. It remains to be seen just how long it will be before they can contemplate claiming another.

The most successful team in calico ended up winning yet another league title in 2006 – only to end up playing in Serie B three months later. The Old Lady’s performances on the pitch did not culminate in their demise, but instead from the overtures of wrong doing by personnel off it.

Calciopoli, the Italian match fixing scandal that tainted the home nation’s World Cup celebrations in the summer of 2006, resulted in Juve being hung out to dry following claims that general manager Luciano Moggi had been in dialogue with referees to influence the outcome of matches – which ultimately proved to be accurate. The club was originally demoted to Serie C1 but following an appeal, were instead relegated to the second-tier of Serie B. They were also stripped off their 2005 and 2006 league titles

Despite a nine point deduction, the club came straight back up in its first attempt having held onto star names such as Pavel Nedved and Alessandro Del Piero – who ended up being top-scorer with 21 goals. However, despite being runners-up in the Scudetto in 2009, the club has failed to reach the dizzy heights it once gravitated, with last season’s failure to qualify for Europe a clear indication.

Leeds United, a proper football club. Steeped in history and tradition, the Whites were on the verge of ruling Europe in 1975 but just fell short to Franz Beckenbauer’s Bayern Munich. Fast forward 29-years and the proud Yorkshire club were consigned to relegation.

Big money transfers and high wages resulted in Leeds’ demise. Then chairman Peter Ridsdale assumed his benefactor like stance would result in a period of success as he borrowed from banks to fund big money names such as Rio Ferdinand, Robbie Keane and Robbie Fowler – to name a few. Despite getting to the semi-finals of the Champions League and presenting genuine title charges, the results began to flounder and missed out on qualification for Europe’s premier competition in 2002.

That began a real domino effect as manager David O’Leary was axed along with a mass sale of players to try and ease their crippling debts. The failure to make it into the Champions League had proved to be catastrophic and Ridsdale’s reckless spending had been nothing more but suicidal.

They were relegated in 2004, a shadow of the team that had contested on the grandest stage of European football three years prior.  The club were even forced to sell their training ground and Elland Road to pay back loans. They went into administration in 2007 resulting in a 10 point deduction and subjecting them to the third tier of English football for the first time in their history.

After narrowly avoiding the drop in 1995, Atletico went under a renaissance to lift the La Liga title the following year under the stewardship of Radomir Antic. Not only that, they completed the double by clinching the Cop del Rey thanks to an extra-time winner by Milinko Pantic against Barcelona.

The future looked bright for Los Rojiblanocs as they hoped to dislodge themselves from the shadow of neighbours Real Madrid. However, despite huge investment in a number of players including Christian Vieri, it would prove to be their downfall. An array of changes in the dugout along with uncertainty in the boardroom resulted in one of the marquee names of Spanish football to slip through the cracks in 2000 and into the Segunda Division.

Club president Jesus Gil came under scrutiny as he was suspended for misusing club funds – ultimately leading to his departure after 13 years at the helm. Those series of events more or less hammered the nail in Atleti’s coffin.

Much like Nottingham Forest (to come), Napoli were the equivalent from the peninsula. A small southern Italian club would rise above their northern counterparts and bath in a period of greatness in the late eighties. The acquisition of Diego Maradona in 1984 would culminate in him leading the Neapolitans from the depths of obscurity and into the promise land. The Aquile would end up clinching two Scudetto, the Coppa Italia and a UEFA Cup.

However the club gradually began to fall from grace. The departure of Maradona and host of integral names culminated into a domino effect as Napoli began to languish in mid-table throughout the nineties. Financial constraints saw a lack of investment which resulted in the club being relegated to Serie B in 1998, having only won two games all season. They did gain promotion two years later but ended up going straight back down. This heaped more misery on the club as financial turmoil threatened to diminish its existence. Upon its bankruptcy the FIGC relegated the club to Serie C1 despite achieving safety in Serie B. If that was not bad enough the club was robbed of its history. Società Sportiva Calcio Napoli was seemingly no more.

De Laurentiis reacquired Napoli’s history in 2006 as he succeeded in getting the club’s name restored to Società Sportiva Calcio Napoli. The club was well and truly back on track under his ownership and the Azzurri got promoted to Serie B in 2006 before finally returning to the dizzy heights of Serie A in 2007 where they have gradually progressed in the last four years.

Forest was nothing more than a mediocre club languishing in England’s second-tier prior to the arrival of manager Brian Clough in 1975. ‘Old Big Head’ went on to create what can only be described as a miracle. Within five years the club not only gained promotion to the top flight, they went on to win it at the first attempt – capturing the European Cup the following year – and then succeeded in defending it. To put into context just how big an achievement that was, it would be like Norwich City replicating the exact same feat within the next few years.

Having picked up their second European Cup in Madrid, the club had cemented a legacy. The team that consisted of John Robertson, Garry Birtles, John McGovern and Peter Shilton will go down as one of the greatest in English football – no doubt. However, as magical as Clough’s time had been he was unable to prevent their relegation during the inaugural season of the Premier League in 1993.

It would turn out to be Clough’s final campaign and although the devastation of relegation was bad enough, Reds fans were more stricken over the departure of their manager of 18 years. Had it not been for him, Nottingham Forest would never have achieved those epic feats.

The Birmingham club enjoyed its defining era in the early eighties. Ron Saunders guided the club to its first domestic league championship in 71 years and entry into the European Cup. Although the defence of their title did not go according to plan – accompanied with tension between Saunders and the board that reached breaking point – they went on to win club football’s most coveted prize and a place in the history books. Saunders didn’t foresee the European Cup win as he tendered his resignation. His assistant Tony Barton subsequently filled the managerial void.

Despite their success on the field, the club were in the red financially with a debt of £1.6m (astronomical money back in those days). This was down to high wages along with money being borrowed to renovate the North Stand at Villa Park. Chairman Ron Bendall sold his 42% stake to former chairman Doug Ellis prior to the club’s UEFA Super Cup victory over Barcelona but it would end up being that generation’s last hurrah as the likes of Tony Morley and Dennis Mortimer parted company with the club.

Villa’s decline continued through the mid-eighties and subsequently succumbed to relegation in 1987 – five years after being champions of Europe.

Sir Matt Busby guided The Red Devils to a long overdue European Cup triumph in 1968 and becoming the first English club to win the coveted cup. The great man resigned a year later, marking the end of an era as the likes of Bobby Charlton and George Best entered their twilight years.

United would begin to diminish following Busby’s departure and despite a brief stint back in the dugout it was not enough to overturn the club’s fortunes. Tommy Docherty took over the reins from Frank O’Farrell in 1972 and saved the club from relegation, but failed to do so the following year in 1974.

They were all but mathematically down prior to their relegation as club legend Denis Law, who was then playing for the blue half of the city, sealed his old club’s fate in a 1-0 win. United were down, six years after being European champions.