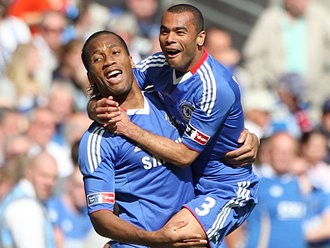 Preliminary results for week seven of the Soccerlens Fantasy Football Game are in, and good news (for me) is that I’ve won my 11 team mini-league. Excuse the self-indulgence, but I’m feeling pretty pleased with myself. I played at the Silver level, which is $5 to enter, and so my 49 point haul was enough to win the $25 weekly prize money. Result. And it’s mostly thanks to Spurs’ Rafael van der Vaart, and Chelsea’s Ashley Cole and Didier Drogba.

Spurs fans will already know about van der Vaart‘s pair of goals against Aston Villa. A far post header for the first and a brilliant fake-then-strike for the second. Goals from midfielders are worth four points each, plus a point for starting the game and another point for playing past the 60 minute mark, so 10 points total for Rafael van der Vaart. He doesn’t just look and play a bit like Arsenal’s Cesc Fabregas, he scores fantasy football points like him too.

Ashley Cole was no fantasy football slouch this weekend either. Not only did he get four points for the clean sheet in Chelsea’s 2-0 win over Arsenal, he also picked up two points for playing more than 60 minutes and – best of all – three points for his assist on Didier Drogba‘s brilliant backwards backheel goal for nine points total. Drogba was also in my team and so gets three for the goal and two for playing. I’m no Chelsea fan, but watching two of my fantasy players combine for that many points had me dangerously close to singing “Blue is the Colour”.

But I had eight other player as well, and after all the fantasy football formation talk on Friday I went for a good old fashioned 4-4-2. The chosen men (who will be receiving no share of my prize money) are:

With my winnings I’m going to take the step up to Gold level for week eight, which costs $9.99 to enter and has $80 prize money split between the top three. There’s an international break to come next weekend, but week eight of the Soccerlens Fantasy Football Game happens the weekend after, and it’s never too early to start selecting your team.