Barcelona defender Gerard Pique was booed by fans during Spain’s clash with Slovakia on Saturday. Pique has been the subject of abuse from the La Roja fans, ever since he spoke out in favour of Catalan independence last October.

Pique was jeered throughout the match. It has been happening regularly and it is now a cause for concern. Spanish Federation see it as a serious issue, and hence the proposed international friendly between Spain and England in November has been moved from the Santiago Bernabeu stadium to Alicante.

Chelsea midfielder Cesc Fabregas has voiced his opinion in support of Pique and he hopes the jeering will stop soon.

“It’s just not a national team issue. It’s a Barcelona vs Madrid issue.

“Pique has always given his best. He’s always been there with a smile on his face when we’ve needed him, just like the rest of our team-mates.

“We’re a team and he is part of that, so it affects all of us negatively.”

Real Madrid skipper Sergio Ramos has also backed the Barcelona defender but he thinks very little can be done to prevent the wrath of the angry fans. 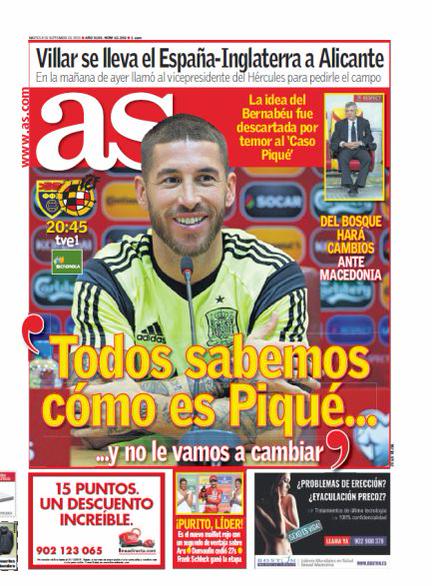 “There’s no point entering into whether he’s always acted the right way,” he said. Here we are Spain and we represent a country. The jeers don’t benefit anyone. We come to play for the national team to do as well as possible—the less said about this subject the better.”

Former Real Madrid players and club legends like Iker Casillas and Guti have expressed the concern for Pique, which shows how serious the matter has turned out.

It all started with Pique attending a mass demonstration with his son calling for the Spanish government to allow a referendum regarding Catalan independence.

“I’ve never seen anything like it. It was incredible” he said on social media.

Later ahead of Barcelona’s Champions League opener against APOEL Nicosia, Pique reiterated that no one should doubt his loyalty while playing for his nation.

“I don’t understand why people are bothered by it, my playing for Spain doesn’t have anything to do with it,” he said last year.

“I don’t think there can be any doubts about me. I have played with the Spanish national teams since I was 16, I have played over 11 years without fail. I have always given my all in every game.

“It is different thing that I also feel Catalan, it was the day of the Catalans and to be in favour of the vote.

“That is something democratic and the people ought to have the right to vote.”

The ongoing political debate between Spain and Catalonia is a sensitive issue and keeping in mind Pique’s strong aversion for Real Madrid, it has naturally prompted passionate response from the non-Barcelona supports.

Pique showed his love for Catalonia when he placed a Catalan flag in the middle of the pitch after Barcelona’s Champions League win over Juventus.

During Barcelona’s title winning celebrations, Pique famously said “Kevin Roldán, this all started with you” that really wounded up Real Madrid fans. He was later booed off whilst training with Spain in Leon.

Pique again made headlines with his comments after Barcelona won the UEFA Super Cup beating Sevilla earlier this year. “F*** them in Madrid, let’s do a lap of honour for them”.

Keeping in mind the fierce rivalry between the two Spanish giants, and the political background associated, it is obvious Real Madrid fans are not taking it lightly. It’s a tough situation for the Spanish Federation to deal with. We’re talking about one of the finest defenders of this generation here who was central to La Roja’s dominance in Europe and the world between 2008 and 2012.

Barcelona press smell a conspiracy theory against Pique, but even they do recognize the former Manchester United defender hasn’t helped himself at the same time. He has given the press and the opposition fans enough reasons to hate him.