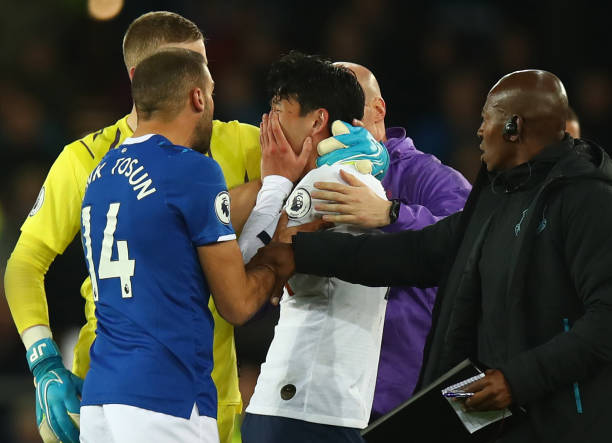 Instead of celebrating after scoring, Son Heung-Min appeared to send an apology to André Gomes 💙 pic.twitter.com/scbRlFF3XT

Spurs blew the Serbian Super Liga side away in their Group B Champions League clash to edge closer to the knockout stages, with the South Korean bagging a brace in the 4-0 win.

Son decided against celebrating after scoring the opener, instead choosing to apologize to the Everton star with his gesture.

The Tottenham winger’s tackle on Gomes during weekend’s Premier League game at Goodison Park saw him crash into Serge Aurier.

The Portugal international fractured his right ankle and had to be immediately taken to the hospital where he has since been operated on and discharged.

Match of the Day presenter Gary Lineker was pleased with Son’s action, reacting thus to it on Twitter:

Son scores a super goal and goes to the camera and says sorry down the lens, presumably aimed at Andre Gomes. Nice touch.

Here is Son goal followed by his apology: pic.twitter.com/EmgxcqeTWo

Gomes is now at home with his family and will continue his rehabilitation under the care of the Everton medical team at Finch Farm.

The Spurs man told BT Sport 2: “It was a really, really tough few days. I realised how lucky I am to have the supporters, my friends, my team-mates – everyone gave me such strong messages.

“Of course I still feel really, really sorry about this accident and this situation.