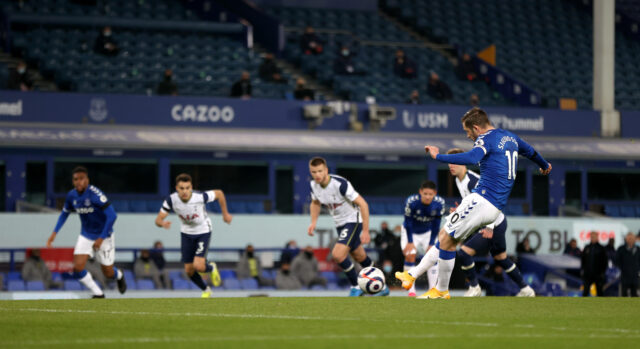 Crooks picked Sigurdsson in his team of the week after the former Swansea City player scored twice against Tottenham in Everton’s last Premier League game.

The 31-year-old hasn’t been consistent with his form this season, but he has been brilliant in the past few months.

He has made 18 starts for the Toffees, scoring six goals and providing four assists in the Premier League.

Crooks has claimed that Sigurdsson has arguably been Everton’s player of the season.

He said to BBC Sports: “The match wasn’t a classic, but the finishing was. Two outstanding finishes from Gylfi Sigurdsson and the same from Harry Kane really made the game worth watching.

“Sigurdsson has made my TOTW on a number of occasions and has arguably been Everton’s player of the season.

“I certainly can’t remember when I’ve seen him play better. He was impressive at Swansea, where he made his name, struggled at Spurs but really matured under Carlo Ancelotti.

“He strikes a beautiful ball and was a thorn in Tottenham’s side all evening. Sigurdsson’s has really found himself at Everton.”

While Sigurdsson has been really impressive in recent games, he still hasn’t been consistent enough, often earning strong criticism from the fans.

Is he Everton’s player of the season? It is doubtful, but he is definitely one of the contenders.

Dominic Calvert-Lewin has scored 14 goals in the Premier League, and he is leading the race for being Everton’s player of the season.

Michael Keane and Ben Godfrey have been outstanding in defence this season for the Toffees, and either of them could win this award.

James Rodriguez has scored six goals and four assists, despite missing numerous games through injury, while Lucas Digne has also been superb this season.

In other news, check Everton’s predicted starting line-up vs Arsenal.