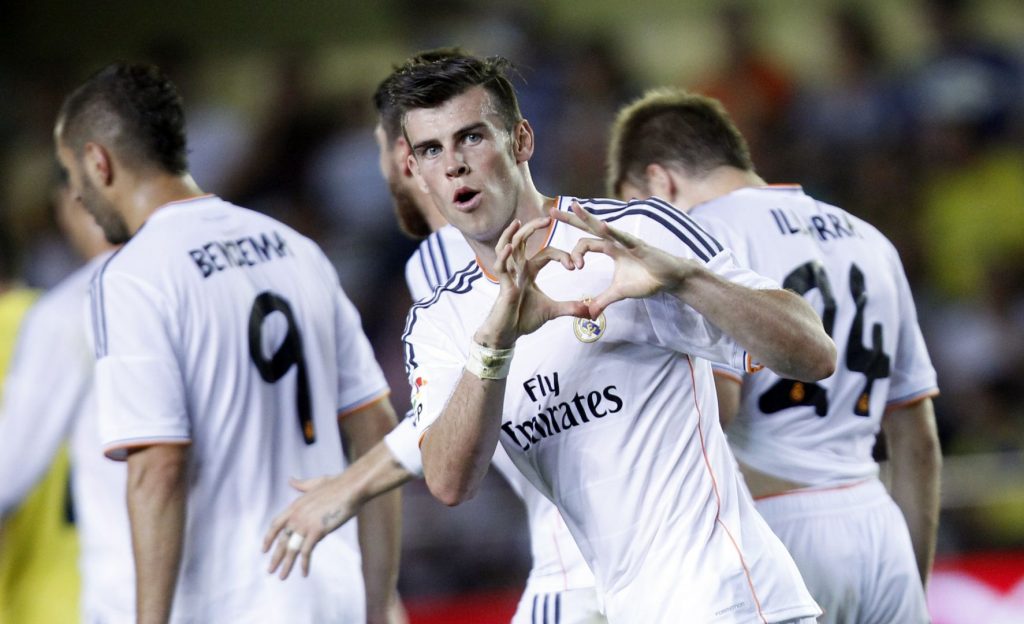 When Gareth Bale made his world-record £77 million pound transfer to Spanish giants Real Madrid in September of 2013, not even the man himself could have predicted how well his first season would turn out.  Bale had enjoyed a meteoric rise in a Tottenham Hotspur team which made its’ first appearance in the Champions League during his time in North London.  In his time at Spurs, Bale went from being an abject failure to the star of the team and, for many, one of the main reasons Spurs broke the domination of the traditional top four in the Premier League.

Despite this, however, Bale, like any player, would have been treating his move to Spain with a mixture of excitement and trepidation.  So many before him and transferred to the Bernabeu amid much fanfare and failed to set La Liga alight.  Jonathan Woodgate (despite being liked by Madrid fans) and Michael Owen are just two such players who spring to mind and it will, no doubt, have played on Bale’s mind – he was desperate not to become another failed British export on the continent.

Those fears would soon be dispelled however.  Despite being troubled by an injury he carried from pre-season which hampered his start for Los Blancos, Bale scored on his debut against Villareal and his star rose from there.  Goals and assists littered his first season and Bale was taken to the notoriously difficult Madrid fan’s hearts, forming and devastating partnership with Karim Benzema and Cristiano Ronaldo which was dubbed ‘The BBC’ in Spain.  Bale would end the season with an impressive haul of 22 goals in 44 appearances for Real and had many in both Spain and the rest of the world purring over his displays.

The crowning moment in his first season, however, would come on 24th May 2014 in Lisbon, where Real Madrid played city rivals Atletico Madrid in the Champions League final.  In a fairytale ending for Bale in his first season in the famous white shirt, he would score the winning goal that secured Madrid the long-awaited 10th European Cup title, dubbed La Decima by the Madrid faithful.

Fast forward just less than a year however, and things could not be more different for Bale.  He has had to endure much criticism from both fans and media alike, having his car vandalised on more than one occasion and suffering the indignity of multiple ‘0’ match ratings in the Spanish press.  Behind such treatment has been a general anger and disappointment from some at the standard of Bale’s performances, with many believing they are a significant way short of his first season’s.  He has also received somewhat remarkable criticism for his interaction with teammate Cristiano Ronaldo, with some Madrid fans believing he is not passing to the Portuguese star as often as he should.

So what has caused this change in attitude towards Bale in such a short space of time?  Despite a blistering start to his Madrid career and one which the likes of Beckham, Owen and Woodgate would have given anything for, Bale has received much more vitriolic criticism than any of his British counterparts.  The reason for this?  In my opinion, you need look no further than the huge transfer fee paid for the Welshman.  From day one, Bale was in a position where, no matter how well he played, he was always going to have to justify the world-record fee paid for him.

This pressure was easily shrugged of in his first season, where everything seemed to be going right.  But in a season where he appears to be struggling for form, it’s apparent from his on the field body language that Bale is feeling the strain.  In comparison to last season, he is playing with such constriction and hesitation, a far cry from the free flowing, pace-driven football he had become so well known for.  At the time of writing, Bale and his Madrid teammates have just crashed out of the Champions League to Italian opponents Juventus, losing 3-2 on aggregate and missing out on the chance to face FC Barcelona in the first El Clasico Champions League final in history.  As has so often been the case this season, the game appeared to pass Bale by, with his nervousness being all too apparent when he was on the ball.

Perhaps another contributory factor to the criticism Bale has received is the fact that he is playing in the shadow of Cristiano Ronaldo.  Ronaldo, like his counterpart Lionel Messi, is racking up the kind of statistics most of us only ever dreamed were possible.  Record-breaking goal and assist tallies have been the order of the day throughout his six year stay in Madrid and Bale was left in no doubt who the King Pin was at the Bernabeu, with rumours suggesting Ronaldo was given a new contract on Bale’s arrival at the club to ensure that, despite Bale’s huge transfer fee and wage packet, Ronaldo would remain the highest paid player at the club.  It’s possible Madrid fans and the media, by comparing Bale to Ronaldo, are holding him up to unattainable standards that few, if any, other players would be able to match.

With statistics like those of Ronaldo’s to match up to, and moves in the board room to reinforce to Bale exactly where he stands despite being the marquee signing of the summer, it’s understandable why he may have become somewhat disillusioned with life in Madrid..  He is playing in a team and a league with two of the best players football has ever seen.  An inability to match up to Ronaldo and Messi should not be taken to mean Bale has been, in any way, a failure.  Had he played in the Los Galacticos side that British compatriots Beckham and Owen played in, it’s possible Bale may not have faced such scrutiny and may have been better equipped to play at his best amongst a team of players as gifted, if not more gifted than the team he plays in today.

What’s clear is that the high profile of Gareth Bale’s signing for Real Madrid due to his astronomical transfer fee, combined with direct comparisons to Cristiano Ronaldo, are contributory factors to the massive scrutiny he is under.  There’s no doubt he is struggling to stand out in a league where Ronaldo and Messi are at their peak and that the Madrid fans and some Spanish media find this reason enough to pick fault with the Welshman.  But there are two reasons why berating Bale to such extremes is so unnecessry.  Firstly, Bale himself did not choose to be the most expensive player in the history of football.  The fee paid for the player, in the day and age of image rights, sponsorship deals and other money making ventures, only has a small part to do with his on-the-field ability and, as such, he shouldn’t be expected to perform simply because the fee paid for him was so huge.  Secondly, it is not Bale’s fault he cannot match up to the standards of Messi and Ronaldo.  As previously stated, few players, if any, would be able to score comparable numbers of goals to Messi or Ronaldo, or have any other statistics within that realm.  In any other era, in any other team, Bale would most probably be the stand out player.  Real Madrid fans and the Spanish media would do well to remember what an exciting player they have on their hands and, if they stopped long enough to appreciate that instead of picking out his every error, maybe the pressure would ease and we would get the chance to see the same Gareth Bale we saw last season and so many before.