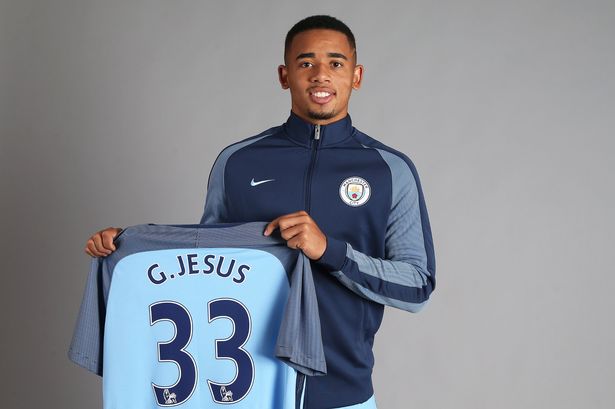 Manchester City confirmed the £27 million signing of Gabriel Jesus from Palmeiras on Thursday. The 19-year-old Brazilian was expected to be available from the start of January, but it has taken until now for the Football Association to approve his registration.

Jesus is likely to go straight into the City squad for Sunday’s visit of Tottenham. He will wear the no.33 shirt, identical to that worn by Vincent Kompany when he arrived in 2008.

The next Brazilian superstar?

Aged just 19, Jesus may be little-known to followers of the Premier League, but he arrives with a big reputation in his native Brazil. The young attacking prospect can be deployed as a centre forward, a supporting striker or a winger. Like many of his countrymen, Jesus possesses great speed and skill.

He is also a clinical finisher, as shown by his recent record for club and country. Jesus enjoyed a breakthrough season at Palmeiras in 2016. He contributed 12 goals and five assists in 27 league appearances as the Sao Paulo club claimed their first domestic title since 1994.

Despite his tender age, Jesus has proved that he will not be overawed by big occasions. He played a key role in helping Brazil to secure an Olympic Gold Medal in the summer. The team were under enormous pressure to deliver at their home Games in Rio.

His form at the Olympics was rewarded with a full international debut in September. Jesus rose to the occasion, scoring twice in a 3-0 win over Ecuador. He has since gone from strength to strength, and now boasts five goals in six international appearances. Brazilian legend Romario is convinced of his ability and has predicted that he will be “our [Brazil’s] next great no.9.”

Jesus has already declared his intention to claim further silverware as a City player. He said: “I want to win titles and Manchester City is a club that is used to winning.

“City is a club that always competes for the title in the competitions it enters, so that was an important factor, and because of the manager, [Pep] Guardiola, and the squad.”

Guardiola is clearly a fan of the 19-year-old, although he is unlikely to displace Sergio Aguero as the club’s main centre-forward. Jesus has enjoyed success for Brazil when leading the line, but Guardiola is more likely to use him just behind the striker.

The manager said: “He makes a good movement, runs in behind, and you have to use him close to Sergio, close to our strikers.”

Jesus will probably be used from the bench initially. The Brazilian will hope to impress Guardiola with his speed and trickery, starting against Tottenham on Sunday. Spurs come into the game on the back of seven straight wins in all competitions, while City are desperate to bounce back from a 4-0 mauling by Everton.

Some South American players have struggled with the pace and intensity of the Premier League, particularly in their first season. That said, Jesus is already a full international. City fans will hope that he can make an immediate impact and help the club close the gap on runaway leaders Chelsea.