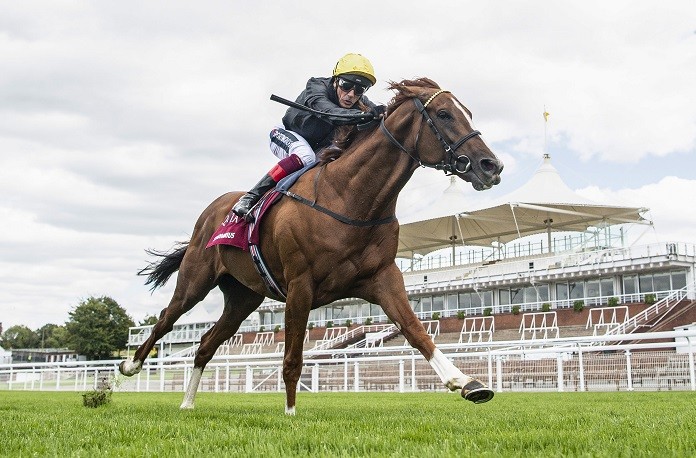 Stradivarius won’t have Frankie Dettori aboard in his bid for a record-extending fifth Goodwood Cup at next week’s Glorious meeting on Tuesday, 26 July with fellow Italian jockey Andrea Atzeni taking over in the saddle.

Bjorn Nielsen, the owner-breeder of Stradivarius, confirmed he had replaced Dettori with Atzeni on what could be the three-time Champion Stayer’s final racecourse appearance. Now an eight-year-old, Stradivarius landed an unprecedented four consecutive Goodwood Cups from 2017 to 2020.

Only torrential rain at the start of Glorious Goodwood last year caused trainer John Gosden to withdraw the horse, leaving Trueshan to win in his absence. The first two of Stradivarius’ Goodwood Cup victories came with Atzeni, rather than Dettori, on board. He also landed the 2017 Queen’s Vase at Royal Ascot on the winningest Group horse in European thoroughbred history.

Nielsen was strongly critical of Dettori’s ride on Stradivarius in this year’s Gold Cup last month. “You can’t blame the horse here,” he told reporters in the Ascot paddock after the pair could only finish third to Kyprios. Stradivarius and Dettori hit a hat-trick in the Royal meeting’s feature staying race in 2018, 2019 and 2020, yet further Group 1 success over the last couple of seasons has proved elusive for them.

However, they were out of the frame in the 2021 Gold Cup when Dettori was caught too far back with something similar occurring in the run this season. Trainer John Gosden felt his stable jockey gave Stradivarius too much to do and powerful horse racing owner Nielsen clearly agreed. This led to Derttori going on a brief sabbatical from his job.

“Undefeated Together” with Atzeni & 3/1 for fifth victory in race

“Frankie Dettori, who has enjoyed a great relationship with Stradivarius and ridden him to many brilliant stakes victories, more than he has any other horse, will by mutual agreement give up the ride to Andrea Atzeni in the Goodwood Cup,” Nielsen said.

“Frankie remains not only the Strad’s biggest fan, but a very good friend. I look forward to seeing him continue his phenomenal career as one of the greatest big-race jockeys of all time. Andrea will be no stranger to Stradivarius as they are undefeated together.”

This announcement hasn’t really impacted the Goodwood Cup betting with 888Sport going a top-price 3/1 about Stradivarius winning it for the fifth time. The midsummer heatwave scorching the UK means good ground looks a certainty, and that will lead to the defection of last year’s winner Trueshan.

Alan King’s gelding needs cut in the ground and, unless thunderstorms hit Goodwood races, he won’t get his conditions. That leaves the Goodwood Cup as an Ascot rematch between 5/2 favourite Kyprios, Mojo Star and Stradivarius. Connections are obviously keen to give their superstar the send-off they feel his career on the track deserves both retiring to stud.