The two latest Soccerlens podcasts [1, 2] have seen Clarkey & Spraggy trying to tickle your funny bone with their suggestions for the film remakes they’d like to see football folk in.

It’s been a hit-and-miss feature so far, so we’re asking you to put the dynamic duo out of their misery and come up with some genuinely funny offerings.

You’ve already been propping up the show with some suggestions but we desperately need more or Clarkey & Spraggy will inflict more of their own on an unsuspecting world. And no-one wants that. 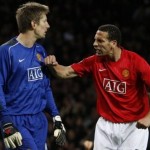 If you think you can do better (and let’s face it, the bar hasn’t been set that high), email your gems to [email protected] and Clarkey & Spraggy will feature them on next week’s show.