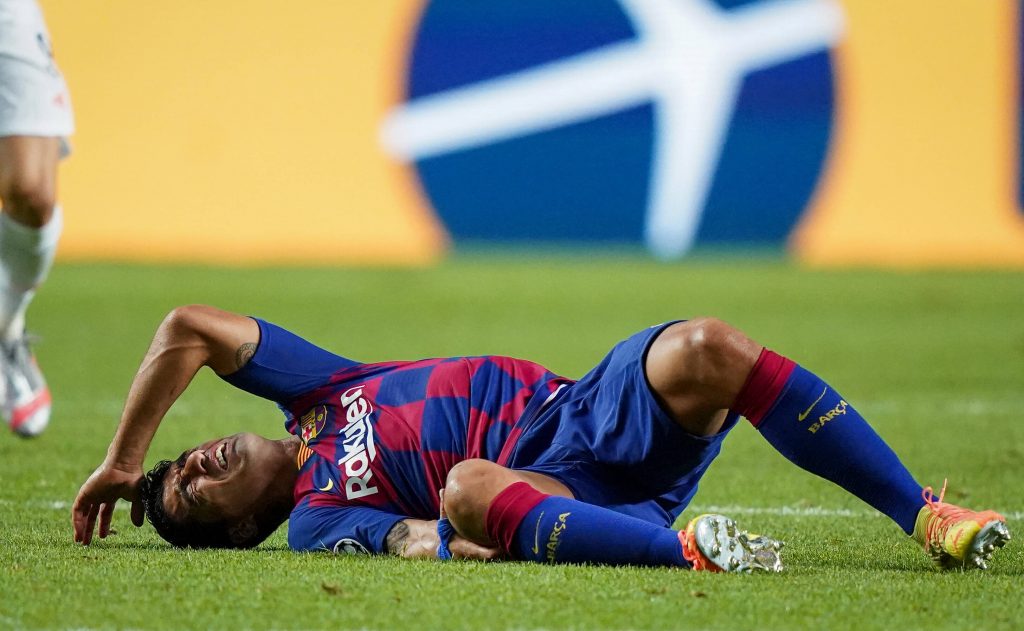 The history of football has been littered with unscrupulous characters – individuals who have the capacity to make your blood boil with their underhanded behaviour.

From diving to winning free-kicks and penalties to feigning injuries to get fellow professionals booked or sent-off, football can be a snidey place at times.

With that in mind, we proudly present our ultimate team of cheats and divers. We’ve even thrown in substitutes and a manager for good measure. 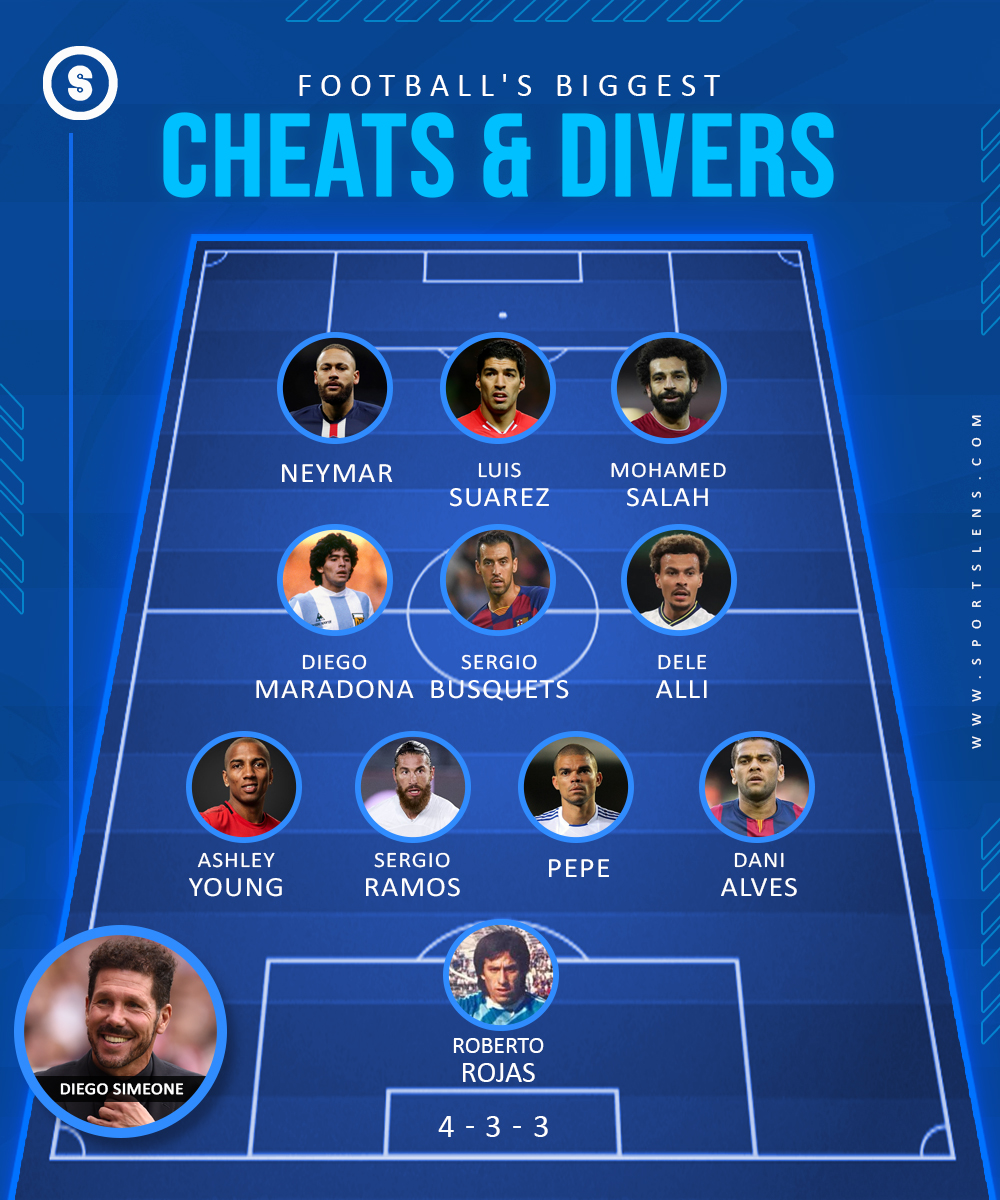 Roberto Rojas (GK) – Widely recognised as the greatest goalkeeper in Chile’s history, Rojas is also infamous for trying to rob Brazil of a place in the 1990 World Cup.

With Chile trailing 1-0, a flare was thrown from behind Rojas’ goal, and he collapsed to the ground. In the ensuing mayhem, Rojas ended up with blood streaming down his face.

Photographic evidence later proved that the flare had missed Rojas, and he had cut himself with a razor. Brazil were subsequently awarded the victory, and Rojas was banned for life.

Dani Alves (RB) – The Brazilian star was undoubtedly one of the best attacking full-backs of his generation, but he also wasn’t adverse to using the dark arts to gain an edge.

His play-acting antics during Barcelona’s victory over Real Madrid in the semi-finals of the 2010/11 Champions League were particularly distasteful.

Alves faked a serious injury after a tackle by Pepe, which led to the Madrid player’s dismissal. Barca went on to win the tie and lift the trophy, proving that cheats can prosper.

Pepe (CB) – Many fans would argue that Pepe got what he deserved against Barca after building up a catalogue of questionable incidents during his career.

The Portuguese defender has dived, headbutted, kicked and stamped his way around Europe, while his harassment of match officials is legendary.

The majority of people think that Pepe is a bit of a clown, but he is also the type of player that fans and managers love to have on their own team.

Sergio Ramos (CB) – Much like the rest of the defence in this team, Ramos is what is known in the trade as a monumental (insert your own insult here).

His charge sheet is littered with villainy, most notably when he put Mohamed Salah out of the 2018 Champions League final with a brutal armbar.

Madrid went on to win 3-1 to leave Liverpool fans in tears and an Egyptian lawyer threatening to sue Ramos for €1 billion for ruining his nation’s chances at the World Cup.

Ashley Young (LB) – Given his recent antics, we were tempted to select Kieran Tierney at left-back, but Young gets the nod by virtue of cheating longevity.

The combative midfielder once branded Young an ‘absolute disgrace’ over his antics and said that he was a ‘Chinaman’ if the full-back was classed as a United player. Harsh, but fair.

Diego Maradona (M) – In addition to being a sublime footballer, the Argentinian playmaker was also a massive cheat.

His ‘Hand of God’ goal against England in the 1986 World Cup finals made him a figure of hate amongst the majority of right-minded football fans.

Maradona was also sent home in disgrace from the 1994 World Cup in the United States after testing positive for the banned stimulant ephedrine. Great player, questionable character.

Sergio Busquets (M) – The Barca midfielder has a dreadful reputation for attempting to gain an unfair advantage from referees.

His role in Thiago Motta’s dismissal during a Champions League game against Inter Milan in 2010 perfectly highlighted his deceptive nature.

However, a Jose Mourinho defensive masterclass ensured that Inter would prevail and send Barca tumbling out of the competition.

Dele Alli (M) – Alli has come in for plenty of criticism during his career for going to the ground far too easily.

The Tottenham Hotspur star has been booked for simulation on numerous occasions, but he has repeatedly claimed that he does nothing wrong.

While it is fair to say that Alli is often fouled, he also dives a lot. Here’s a thought, try doing less rolling around like a toddler, and people might have more sympathy when you are fouled.

Mohamed Salah (F) – If Salah wasn’t Egyptian, you’d be hard pushed not to think he was related in some way to Tom Daley.

Both are extremely adept at diving, although Daley is the only one of the pair who should actually do it during their respective sporting activities.

The Liverpool forward’s attempt to con a penalty against Everton in February 2021 proved beyond any doubt that Salah is a cheat.

Luis Suarez (F) – The Atletico Madrid striker was a certainty to be picked for this team after a career packed with underhanded incidents.

His handball on the line in the 2010 World Cup quarter-final between Uruguay and Ghana showcased the depths to which he would stoop to win a game.

Factor in diving, biting and the odd bit of racism and Suarez has lousy behaviour off to a fine art.

Neymar (F) – The Brazilian superstar attracts as many headlines for his play-acting as he does for his footballing ability.

Former Spain and Real Madrid coach Vicente Del Bosque and ex-Brazil star Zico are amongst a plethora of people who have blasted Neymar in the past.

Many pundits tipped Neymar to be the natural successor to Lionel Messi and Cristiano Ronaldo. He spends too much time diving for that to happen.

Also Read: The 15 Greatest Sports Cheats Of All Time.