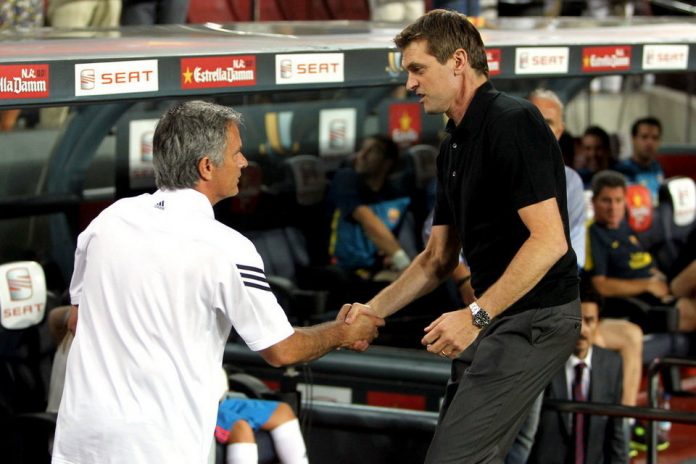 It’s getting tiresome; every other month a Clásico is contested in some competition (La Liga? The Copa del Rey? The Champions League? The Supercopa de España?). At least that’s how it appears.

Though it’s not quite the El Clásico overkill experienced a little over 18 months ago, one could be excused for not caring about this particular fixture. After all, it’s just another Clásico, right?

There’s no such thing as Clásico fatigue. It may not always be the most spectacular of matches, but it almost certainly is the most entertaining one available to the casual and non-casual football fan. To a lot of people it’s a lot of different things: Catalunya vs. Spain, La Masia vs. Los Galacticos, Lionel Messi vs. Cristiano Ronaldo, Tito Vilanova vs. Jose Mourinho, Good vs. Evil (or vice versa).

On and off the pitch emotions run high, tension rise, friendships are suspended – it’s quite simply more than a game. Whether one sits in the stadium, in a bar, or at home on the couch, one finds themselves rooting for one or the other.

At the end of the Clásico someone is definitely disappointed – the players, the fans, the media…someone will surely have something to complain about. But, and this can’t be stressed enough, the El Clásico is anything but boring. The match might end in a goalless draw, but it’s probably one of the most entertaining fixtures without a goal one has ever witnessed.

Dubious refereeing; a whole lot of playacting on both sides; tackles that border on assault, and the most hostile crowd imaginable.

Oh, yeah. Ever since self-anointed Special One, Jose Mourinho, inserted himself into Clásico folklore, the post-match interviews have almost overshadowed the actual match itself.

This Sunday’s meeting of the two Spanish giants is actually the most impactful one since….well, um, the last time those two sides met. FC Barcelona could add another valuable three points to their eight point cushion over their Blanco rivals, effectively rendering this La Liga campaign theirs to lose.

A bit of hyperbole?

To put it into perspective, Real Madrid just lost 14 points in their title-winning 2011/2012 campaign. Granted, last season was a record-breaking campaign which should not be easily repeated but as recent history has shown, during the course of a season those two teams don’t slip up that often. Real Madrid must win this match to prevent becoming a passive bystander who is forced to wait on mistakes on Barcelona’s part.

However, FC Barcelona, though leading the current La Liga standings, look anything but the well-oiled football machine fans have become accustomed to. While new manager, Tito Vilanova, has thus far maintained a perfect record in La Liga, his team has rarely convinced.

In title-winning campaigns of past, FC Barcelona could always rely on the rock-solid partnership of Carles Puyol and Gerard Pique at back. For the Clásico, however, the former is certainly out while the latter is uncertain to even make the squad, let alone start. Last season saw departed ex-manager, Pep Guardiola, experiment with a three man defense.

Some say it’s was born out of necessity due to Carles Puyol’s ongoing injury problems and/or Gerard Pique’s fluctuating form, while some offer the theory that Guardiola grew bored at dominating his opponents. In any case, Barcelona didn’t employ a traditional three man defense lining up three pure centre-backs, mainly because they didn’t have the necessary personnel.

That’s just not the Barcelona way. In Catalunya they do things differently. Eric Abidal and even Sergio Busquets were forced to play at centre-back, before settling on moving vertically-challenged Javier Mascherano (a natural defensive midfielder, a world-class one at that) permanently into the heart of defense.

El Jefito has done a solid job as makeshift centre-back but then again, he rarely faces opposition that truly tests him. But whenever he does face quality opposition he is usually brutally exposed. Unlike Eric Abidal, who is a natural defender by trade, Mascherano is neither tall nor fast. He’s practically the worst possible candidate to turn into a centre-back. 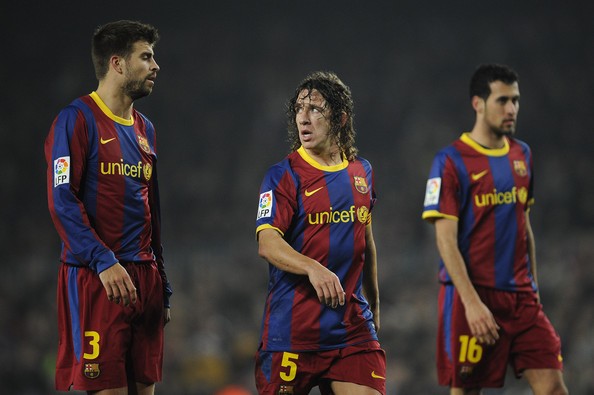 Instead of addressing their apparent centre-back issues over the summer, Tito Vilanova bizarrely opted to buy another defensive midfielder in Alex Song. To add to the general confusing emanating from the Camp Nou, Tito Vilanova even claimed that Song was bought with the idea in mind of making him a centre-back. Makes sense, right?

If Gerard Pique fails to make the squad on Sunday evening it would theoretically leave a window of opportunity to La Masia youngsters (and natural centre-backs) Marc Bartra or Andreu Fontas. But Tito Vilanova doesn’t trust either which makes a Javier Mascherano and Javier Mascherano pairing more likely.

Anyone that watched the Barcelona’s away tie against Sevilla can attest – Mascherano and Song are abysmal in tandem. Song still thinks of himself as a defensive midfielder and Mascherano isn’t the organizer a makeshift defense, like the one Barcelona currently employs, needs.

The only natural defender Barcelona can rely on is Dani Alves, who is spending more time in the opposition half than his own. If one were to describe Barcelona’s defense with an adjective: adventurous. (Personally, I’d go for hideous)

Real Madrid on the other hand will travel to Catalunya with an almost full-strength squad. This means last season’s most potent strike force (the foursome quartet of Cristiano Ronaldo, Mesut Özil, Angel Di Maria and Karim Benzema), who have scored 106 La Liga goals in between them, will face the most inexperienced centre-back pairing in Spanish football, if not all of Europe.

Barcelona ‘defend’ through extended cycles of possession, thus rarely inviting opponents to take advantage of their susceptible defense. Quite fittingly, Real Madrid modus operandi is the exact opposite of Barcelona’s game plan; Los Blancos are probably the best counter-attacking side on the continent.

Not taking the current La Liga standings into account, Barcelona do not look the favorites for this tie. Fortunately enough, it’s a can-lose situation for the Catalans as opposed to Real Madrid’s must-win position.

That said; this Clásico looks to become a memorable one, either the stuff of nightmares or legends. One way or the other, someone is going to be disappointed.