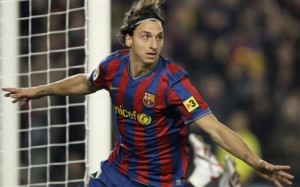 FC Barcelona looks to reach the quarterfinals as they host Stuttgart with a 1-1 score after the first leg.

FC Barcelona is the last Spanish team remaining in the Champions League after Sevilla and Real Madrid both being knocked out in the past week. Barcelona were able to get an away goal in the first leg and will have the advantage of playing at the Camp Nou on Wednesday. The club will be at close to full strength as Carlos Puyol is the only player doubtful for the match.

Stuttgart will be looking to join Bayern Munich as the second Germany side in the quarterfinals and have admitted they will need the match of the season to win on Wednesday. They will be led in the attack by Cacau who scored Stuttgart’s goal in the first leg (1-1 draw). While they will be the underdogs in the match, Stuttgart have surprised many by reaching the round of 16.

Barcelona will have all the pressure on them and are expected to win the match. They will have Lionel Messi, Dani Alves, Zlatan, Ibrahimovic, and Xavi all available for Wednesday. If they play to their potential, Barcelona should win the match. This doesn’t always happen and it could easily be a very close match that ends in a scoreless draw or requires extra time.

Messi is coming off a hat trick on the weekend as Barcelona won 3-0 against Valencia. Stuttgart lost 2-1 at Schalke on Friday in their last match.

Barcelona will dominate possession as they do in just about every match so Stuttgart will have to rely on the counterattack. It’s not improbable for Stuttgart to knock off the defending champion. They will be playing against the odds and won’t have the pressure. Even with the pressure, Barcelona should advance because they are clearly the better side.