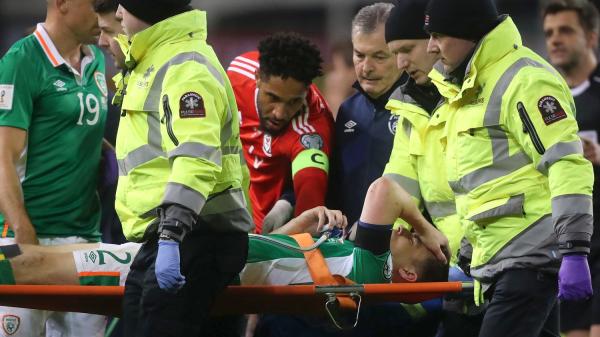 Everton defender, Seamus Coleman, suffered a broken leg in a horrific tackle from Neil Taylor during Ireland’s 0-0 draw with Wales in a World Cup qualifier.

Coleman was taken off the pitch on a stretcher, and was taken to hospital. The right-back is facing a lengthy spell on the sidelines.

Taylor was criticised for his risky tackle on Coleman with little over 20 minutes left in the match.

According to reports from the Times, no replay was shown of the incident on television. However, pictures of his leg snapped and bent at an acute angle went viral on social media.

Take a look at the horrifying tackle [graphic content warning]

The 28-year-old has been ever-present for Everton this season, and his loss will be a major blow for club and the country.

Martin O’Neill, the Ireland manager,  said after the game:

“He’s a fantastic player and character. It’s a major blow for the lad, his club and us. Losing Seamus is a major blow — but the most important thing is Seamus’s health.

It’s a real blow to him, he’s having the season of a lifetime at club level, he’s a big player for us and a great character. It’s a big loss to Everton and a big loss to us. But he’ll fight back I hope. It puts things in perspective I suppose.

It was a bad night for Everton as they also lost James McCarthy to injury. He seems to have aggravated his hamstring problem during the warm-up.